As we embark on the year 1972 which has been unanimously proclaimed International Book Year by Unesco's General Conference, I invite all the countries of the world to join in this great venture, each according to its resources and needs, and to adopt the Year's slogan "Books for All".

For thousands of years the written word and for centuries the printed word have played a vital role in the preservation and transmission of knowledge. They have been man's most effective ally in fashioning his thought and in his conquest of freedom. Even if certain cultures have been founded on communication by word and gesture these cultures can no longer hope to survive or indeed develop in the modern world without recourse to the written word.

The book is the most dependable and the most convenient instrument of communication ever devised by man. With the book the human mind for the first time was able to conquer time and then space. In the past quarter of a century we have witnessed the development of the book as one of the means of mass communication and we must not fail to recognize the role and place of the book in the service of the new spirit of community that the mass media have made possible.

There exists in the world today a tremendous need for reading. So great is this need that for large portions of the world's population one can speak of a veritable "book famine". Yet while the technical revolution that has taken place in the production and distribution of books has made it possible to place on the market an ever-increasing number of relatively inexpensive, good quality books, the developing countries are suffering from a scarcity of books that is becoming more acute as educational opportunities grow.

The developing countries at present produce no more than one-fifth of the total number of books published in the world so they must rely on book imports from abroad to help meet at least part of their needs. In the long run their full requirements can only be met by setting up their own national publishing industries.

Unesco's world programme for the promotion of books aims specifically to redress this serious imbalance between the developed and the developing countries. But the problem is not only one of quantity.

It is equally or more important that the book the unparalleled instrument for setting down man's wisdom and knowledge promote individual fulfillment and social progress; that it give all persons a chance to appreciate the best that the human mind has to offer the world over; and that it serve to create a better understanding between peoples as a necessary step toward a true and lasting peace.

Even in countries with a thriving publishing industry, the book has by no means as yet become an integral part of everyone's life. These countries have no problem of getting the book to the reader, thanks to their extensive distribution systems and outlets. More often than not, the real problem for many of them now (though it varies considerably from country to country) is how to get the reader to the book. This is borne out by the high percentage of non-readers revealed by recent surveys.

Has the time not come for a full re-appraisal of the problems of publishing so that electronic and audiovisual techniques, which are exerting a growing influence on books, may be placed at the service of the publishing world? Since the book can no longer be isolated from the other major information media, should we not now re-examine its role in society? 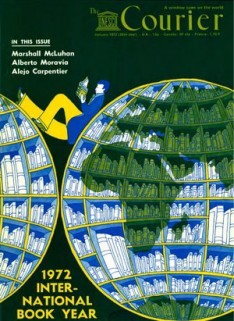