The conservation of the world's natural resources and particularly Its wild life has been a serious preoccupation of Unesco since its creation. The Unesco Courier, in the past, has devoted space in several issues to this vast problem. The present number deals in major part with the wild life of Africa. It is published on the eve of an important international conference, to be held this month In Tanganyika, on the threat to nature and the need for conservation in tropical Africa. The meeting under the auspices of Unesco and FAO has been called by the International Union for the Conservation of Nature and Natural Resources (IUCN) and the Commission for Technical Co-operation In Africa South of the Sahara.

Last year, Unesco commissioned Sir Julian Huxley to make an on-the-spot Investigation of the state of wild fauna and natural habitats in central and east Africa. Sir Julian's book on this subject is to be published by Unesco in October. This issue brings readers salient passages from his alarming and challenging report.

Unesco has just completed, too, a broad survey of the natural resources of the entire African continent. More technical [in nature, It is probably the most. complete analytical survey yet made of our present knowledge of the vast resources of this awakening continent. Professor Bourlière's article, on the facing page, is an edited version of a chapter from this volume to be published at the end of the year.

It has become almost commonplace nowadays to speak of the spiralling growth in our planet's population which has increased by 500,000,000 persons since the beginning of the present century. But this and the concomitant demands of modern civilization for more food and more. space, have meant that the few untouched natural areas of our planet where animal herds can still roam freely are being steadily encroached upon. They are rapidly shrinking in size and their wild life is threatened with extinction.

That is why national parks and nature reserves, which now exist in practically every civilized country, are considered of greater importance than ever before. That is why the United Nations Economic and Social Council recently deemed it both urgent and vital to ask the IUCN to complete a study of the world's existing national parks and reserves.

Wild life and its natural habitats are a scientific and cultural heritage of all mankind. The editors present this issue as a warning cry to alert public opinion to the perils which endanger this heritage today. 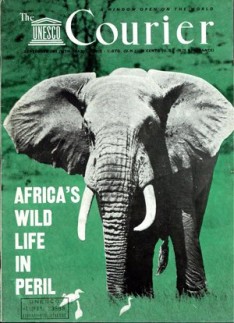