The human immunodeficiency virus strikes at children and adults, at rich and poor, at blacks and whites, in both North and South. Like pollution, it knows no frontiers. It is a danger for us all, and no country, however well endowed in specialized scientific resources or in institutions, can tackle it alone. Humanity must unite to defeat it.

Many have already fought against the disease, in the United Nations system, in national teams working on a professional or voluntary basis, in local associations and movements. Thanks to them, considerable progress has been made on a number of fronts research, care and prevention.

Progress has been made, but it is not enough. Because of its far-reaching human implications and its impact on economic and social life, Aids has acquired a multidimensional quality which is not yet fully appreciated. It is increasing the already vast differences between countries and hindering the development efforts of the poorest of them. It is highlighting the effects of ignorance and extreme poverty and the flagrant inequalities of our world in the areas of health, information and education.

UNESCO will draw on the experience it has built up, notably through its preventive education programme, not only in order to pass on information but also to bring about changes in people's behaviour with regard to Aids both as a disease and as a social phenomenon.

Since action to provide information and establish communication is effective only if it is adapted to the socio-cultural environment in which it is carried out, UNESCO will make available to its partners the benefits of its research and experience on that pervasive and elusive factor which is cultural specificity.

UNESCO will also continue to assist research through its various networks concerned with molecular and cell biology and microbiology, and through the World Foundation for Aids Research and Prevention that Professor Luc Montagnier and I set up at the beginning of 1993. Our first concern is to develop exchanges of information and co-operation among researchers in all the disciplines involved and to promote the participation of specialists from the countries hardest hit, especially African specialists.

UNESCO's task also involves perhaps most importantly preventing or checking, with the agreement of the communities concerned, any measures including legislative ones that would tend to exclude or discriminate against people who are suffering from the disease or are HIV-positive, or to violate human rights and fundamental freedoms or the dignity of the human person. This is vital for the preservation of the "intellectual and moral solidarity of mankind".

Aids is clearly not just a medical problem. It underlines the interdependence of our world and the need for an interdisciplinary strategy implemented with the close co-operation of all concerned. The international mobilization needed for this cannot be confined to action by the United Nations system.

It must be backed by states and their political leaders, since the aim is the rational organization of efforts and funding. Within each country, those in charge of health and also of the economy, finance, and education have a crucial role to play in fighting the scourge. They will have to encourage practical preventive action and make all aspects of Aids an integral part of their policies and development projects.

The resources available for combating this great collective threat are limited, particularly when compared with the resources of all kinds devoted to defence. In our budgets we have funds to pay the price of war, but we have made no provision for the cost of the fight against Aids, malaria, pollution or ignorance, i.e. the cost of peace. The transition from a culture of war to a culture of peace must be speeded up.

International action would stand little chance of success unless it was supported by the mobilization of everyone in civil society: non-governmental organizations, foundations, associations and the private sector. Only solidarity in its most elementary sense that which binds together the representatives of a species in the face of a common foe will enable us, through an alliance of science and wisdom, to overcome both the medical epidemic and the social, cultural, economic, political and ethical offensive that Aids has unleashed on humanity. 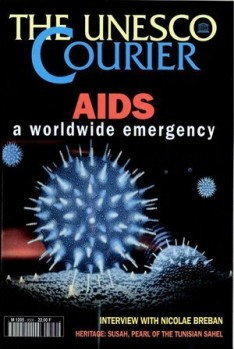