From the Ligurian Sea, between Genoa and Nice, to Vienna, Ljubljana and the Adriatic coast, the Alps stretch in a broad, arcshaped band through seven European countries: France, Italy, Switzerland, the Federal Republic of Germany, Liechtenstein, Austria and Yugoslavia. Over 1,000 kilometres long and with an area of almost 250,000 km2, they are Europe's most important mountain system. Their width varies from some 50 km between the plain of the Po and the Gulf of Genoa in the west, to over 200 km in the Tirol between Austria and Italy in the east. Alpine ridges and peaks, rising in many places to over 4,000 metres, reach their highest point in Mont Blanc (between France and Italy) at 4,807 metres.

The Alps are one of Europe's most important hydrographie systems. Three of the continent's greatest rivers and their major tributaries rise there the Rhine, the Rhône and the Po, as well as some of the main tributaries of the Danube. Scattered through the Alpine chain are over 4,000 lakes, including Lakes Geneva (France and Switzerland), Constance (Fed. Rep. of Germany, Switzerland and Austria), Neuchâtel (Switzerland), the Chiemsee (Fed. Rep. of Germany), and Lakes Garda, Como, Lugano and Maggiore (Italy).

For thousands of years this vast mountain system has formed a distinct historical and cultural region. Man crossed the Alpine passes in early times, leaving many traces of his presence such as the rock engravings of Valcamonica in Italy and the finds unearthed at Hallstatt in Upper Austria and La Tène in Switzerland, sites of major archaeological importance which gave their names to periods of the Iron Age in western Europe. Today the Alps are a focal point of the communications system linking northern and Mediterranean Europe, crossed by many road and rail passes (the Brenner, the St. Gotthard, the Great and Little St. Bernard, the Mont Cenis) and tunnels such as the Simplón, the St. Gotthard, the Fréjus, the Mont Blanc, the San Bernardino, the Arlberg and the Great St. Bernard.

The Alps also constitute a remarkable example of mountain ecology. Over the centuries man has left a strong imprint on them by painstakingly creating a remarkable landscape and economy, the balance of which is today in many cases threatened by modern developments.

Germanic, Latin and Slavonic elements have largely contributed to the composition of the Alpine population. But demographic and linguistic variety does not preclude the existence of strong common cultural features, such as the affinities which characterize the folk music of different Alpine countries.

This issue of The UNESCO Courier is an attempt to trace some salient features of the Alpine world which is the geographical heart of Europe, as well as a great historical and cultural centre and a leading tourist attraction. 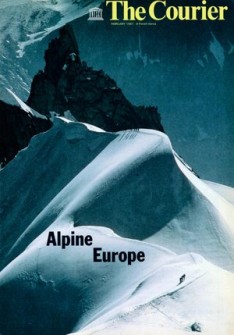