The General Assembly of the United Nations, has proclaimed March 21 "International Day for the Elimination of Racial Discrimination". In the same resolution proclaiming this international Day, which coincides with the anniversary of the Sharpeville massacre in South África, the Assembly again called on States practicing racial discrimination or apartheid to comply with the United Nations Declaration on the Elimination of All Forms of Racial Discrimination and with the Universal Declaration of Human Rights.

At the beginning of this year, on January 18, an important Unesco report on the effects of apartheid on education, science, culture and information in South Africa was made public by the United Nations in New York. This report will be published in its final form in English and French in some months time. The present issue includes passages from this document together with a series of statements on the effects of apartheid on South Africa's cultural life. These articles have been specially written for the Unesco Courier by the distinguished South African writers:

Discover other issues and articles on Racism in the UNESCO Courier. 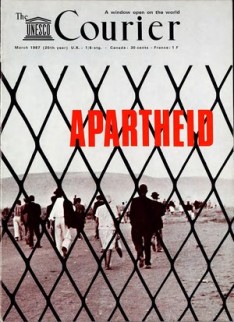