The Art of hospitality

In ancient Greece, strangers were thought to enjoy divine protection and were received accordingly. In rural India today, they can still count on a welcome fit for the gods. Among the Bedouin of the desert, they are sheltered and protected by their host and all his clan.

From time immemorial people have felt a sacred obligation to share their bread and salt with the passing stranger. The visitor would be invited to sit down at the fireside or in the shade of the veranda and offered a lodging for the night. At a time when they were not protected by law, travellers could, thanks to the conventions of hospitality, find shelter in a house or community not their own. In deserts, mountains, steppeland and other regions where climate and nature were hostile, hospitality could even mean the difference between life and death.

With the development of long-distance trade, travel and exchange, hospitality was extended to pilgrims, merchants and diplomats. Great travellers such as Marco Polo and Ibn Battuta recorded many examples of the generous hospitality without which their epic journeys across Europe, Africa and Asia would have been impossible.

What is left today of the hospitable traditions of olden times? In an age of mass tourism when travel has become a routine matter, a sense of conviviality doubtless still survives the stresses of big city life where living space is often in short supply. But above all, hospitality today tends to be more impersonal and anonymous than in the past. It has even become a matter for legislation. Bilateral treaties and international conventions define the status of foreigners and safeguard their person and their rights.

In theory, time-honoured traditions of hospitality are being interwoven with new values of liberty and democracy. In practice, however, strangers and foreigners are still all too often the victims of incomprehension and contempt from their "host" societies. Racial or national prejudices weigh, sometimes heavily, on those who are today known as "immigrants". It may thus be timely to recall, as we do in the following pages, some traditions of the hospitality which was once such a widespread virtue and again awaits recognition as an expression of tolerance and solidarity. 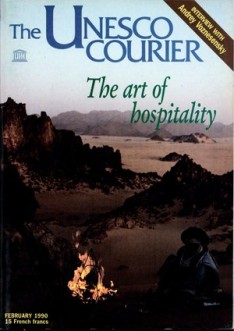