Pomposity of intent and orthodoxy of style these were the main traits of European architecture against which Art Nouveau rose up towards the end of the last century. It was a time of rapid urban growth, when the rich wanted to show off their newly-acquired wealth in town houses and other architectural statements that took themselves so seriously that they seemed heartless. Art Nouveau, in contrast, was a vision that sprang straight from the heart as a rejection of the grey uniformization of the environment: of dwellings, furniture, tableware and other artefacts that strongly shape the ways in which people live and feel about their daily lives.

Art Nouveau expressed nostalgia for Nature and the past, for the non-urban and the nonmodern, for the anti-rational swirls of vines and flower stems, the rough texture of pine cones, and more generally for pre-industrial asymmetry. It also grew in tune with the medieval longings that so marked the aesthetics of the late nineteenth century, and were often connected with movements of national revival.

But Art Nouveau also looked ahead, happily seizing the materials of its day and proving itself to be a force for ingenious innovation. 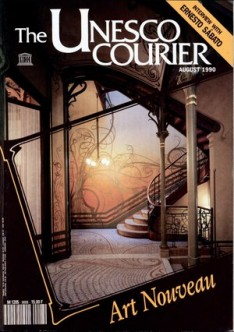