Art in the street

Wayside theatre and circus . . . outdoor festivities . . . giant murals that enliven the urban scene . . . today art is taking to the streets, displaying its wares for all the world to see and recapturing a vitality it has often lost in the past.

Once upon a time cities were vivid, colourful places; in the modern world they have become drab. Now, however, there are signs of a reaction against this urban monotony. Many people who live In the world's great cities are Intent on rediscovering the language of colours. They have a nostalgic yearning for a sense of belonging and Involvement in their surroundings, and they feel frustrated when they do not find it.

In some arts such as circus and theatre, a return to their roots can be liberating and even revolutionary. Tradition and modernity combine in an explosive mix and make the world a more exciting place to live In.

More and more often, people In towns and villages alike are joining together to bring their neighbourhoods back to life. They are reclaiming the streets for festivities that may be spontaneous or organized, involve a mere handful of participants or entire communities. When such events Include minority groups that feel marginalized, the impulse can take a militant turn. By using the walls of cities to make their presence felt, people seek recognition for their identity and communication with others.

The scene Is set for the street to become a place of freedom of expression and cultural dialogue... 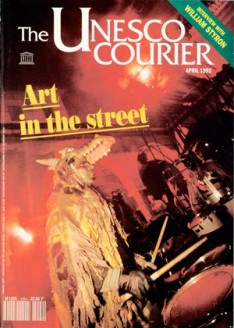