The baroque age in western Europe began sometime around 1600 and lasted until the mid-eighteenth century. It saw the flowering of a culture which, although it developed mainly in the Latin countries, spread to eastern Europe and above all took root on a grand scale in the Spanish and Portuguese colonies of South America, where an important hybrid form of baroque art emerged.

Baroque culture was the product of an age marked by profound economic and social crisis during which the pomp and ceremony associated with absolute monarchies and the Counter-Reformation could not conceal signs of depression in a Europe whose religious beliefs had been shaken by the Lutheran Reformation and by the first conquests of rationalism and modern science.

This acute sense of crisis, which would last until its extinction a century and a half later by the optimistic humanism of the Enlightenment, shaped many of the . characteristic features of baroque art and literature: disenchantment, a sense of the illusory nature of the world of appearances, a theatrical conception of life, an acute awareness ofpassing time and of the certainty and finality of death, a taste for artifice and display, and, in art, for exaggerated, "expressionist" forms. But paradoxically enough, such depressive tendencies triggered off an explosion of sensuality and whetted an appetite for life and enjoyment which is revealed in the dazzling exuberance of the baroque visual arts and the prodigious universe of sound which is baroque music.

The baroque art and culture of seventeenth - and eighteenth- century Europe also flourished in the Spanish and Portuguese colonies ofAmerica, where in time it underwent a transformation. Models imported from the Iberian peninsula were gradually adapted, subtly modified and given an original imprint as the process of ethnic and cultural intermingling overflowed into art. Latin American baroque would eventually find full expression in such magnificent creations of folk art as the church ofTonantzintla in Mexico, the "Sistine Chapel" of colonial art.

Some critics consider that the Baroque is not only a European and Ibero-American phenomenon but a "cultural constant" which recurs throughout the history of art. It is undeniable that outside Europe and the Americas, in such different cultural regions as Persia, China, Japan and Kampuchea, forms of expression closely related to baroque sensibility have appeared. It is also significant that a century like our own, a century of crises, upheavals and vacillating beliefs, should feel an affinity with certain seventeenth-century forms of art and culture. Perhaps it is justifiable, then, to consider the Baroque as a category of aesthetic sensibility and thus recognize its global dimension.

This number of The UNESCO Courier does not claim to paint a complete picture of the immense world of the Baroque. What we have tried to do is to show some of its most characteristic manifestations and some of its finest achievements. 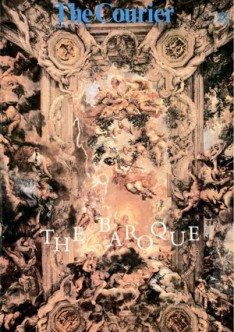