In the 1960s and 1970s, the development of high-yield cereal varieties combined with the use of pesticides , irrigation and fertilizer brought a Green Revolution to some but not all parts of the Third World. This issue of The UNESCO Courier, which is largely devoted to the application of new scientific techniques to agriculture, enquires into the extent to which the Green Revolution is likely to be followed by a "Biotechnological Revolution" which may help developing countries to solve some of their food production problems.

Although the term biotechnology to denote the use of the biochemical and genetic capacities of living organisms for practical purposes is fairly new, man has been engaged in "biotechnological" activities since very early times. Fermentation and the improvement of useful plant and animal varieties by cross-breeding are but two examples. The new biotechnology, however, differs from these time-honoured practices in that it uses genetic engineering and techniques of fusing cells of different organisms to surmount previously impassable barriers between species. Genetic engineering (or gene-splicing), which involves the direct transfer of genes "those tiny command posts of heredity that tell living cells whether they will become bacteria, toads or men" into the cells of different species has been described as the "most powerful and awesome skill acquired by man since the splitting of the atom."

In the first part of this issue we look closely at some of these new biotechnologies: how they work; how they are currently being used in different parts of the world and to what effect; the latest trends in this field where changes occur quickly and possibilities are vast. While our contributors focus mainly on the direct applications of biotechnologies to agriculture in the developing world, they also note present and potential uses in energy production, human and animal medicine and the management of certain environmental problems.

The second part of the issue asks broader questions. How can the new biotechnologies be best harnessed to development in different social, economic and cultural contexts? Will they be a panacea or, contrariwise, are they likely to aggravate existing disparities between developing countries and those of the technologically advanced world? The new biotechnologies and especially those applied to plants, put great possibilities into the hands of those who control them. How should this power best be exercised? How should access to the fruits of research based on plant genetic resources originating in the developing world be equitably organized?

UNESCO, which is engaged in worldwide efforts to strengthen rural development through training in the biological and agrobiological sciences, in applied microbiology and in biotechnology (see article page 27) , is closely interested in the above issues as part of its basic commitment to promote the use of science and technology for the benefit of all humanity. The complex nature of the problems and some possible approaches and solutions are traced by Dr. Albert Sasson in the article which forms the conclusion of this issue. 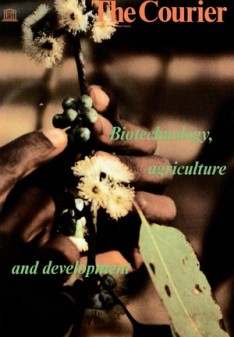