This issue of The UNESCO Courier offers a voyage of discovery: scientific, geographic, historic, cultural, artistic and humanitarian.

We have taken the life sciences as a point of departure. Can any science be richer in potential discoveries than contemporary biology? The ability to explore the infinitely small, to isolate and study genes, those units of hereditary information which are basic to life, gives biology an often disturbing power to investigate and intervene that places it in the vanguard of modern science. Visions of the "outer limits" of life are evoked for us by the noted biologist Professor François Gros in his account of some of the marvels emerging from the indefatigable laboratory explorations of today's Marco Polos.

When the discovery of the Americas is referred to, especially in the Spanish-speaking countries, it brings to mind the arrival of Europeans in the New World, the fifth centenary of which will be commemorated in four years' time. Is "discovery" the correct word to use in describing this event? For Europeans there was most certainly a discovery, but was it the same for the peoples of the Americas, for those who were "discovered"? As the Venezuelan writer Arturo Uslar Pietri points out, 12 October 1492 in fact marked the beginning of a pattern of universal cultural exchanges and mutual influence, a process which transformed the entire world and which is still taking place today.

We also take a look at the young art of African cinema, which may be a discovery for many readers, whatever continent they come from. In the short space of thirty years, African film-makers have produced works which rank with the great classics of world cinema.

Other discoveries to be made in the following pages include the Convent of San Francisco, Lima, a masterpiece of Spanish colonial art on which urgent restoration work is currently being carried out; and the superb mosques built more than four centuries ago by the Turkish architectural genius, Mimar Sinan.

Finally, we draw attention to the urgent need to display solidarity with Africa, whose plight is one of Unesco's major preoccupations, in two articles which analyse the development of science and technology in that continent. A large proportion of the world's population live in Africa, often in conditions of extreme poverty, influenced by the effects of a serious crisis that can only be overcome with the aid of a science and technology policy fully adapted to African needs. 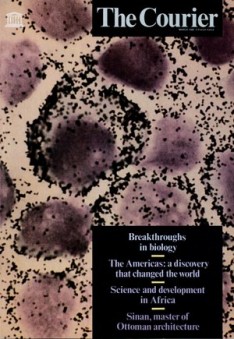