Camões and the Portuguese voyages of discovery

Intercontinental travel by rail, sea and air is today readily available to anyone with the means to pay for it. Accurate detailed maps, charts and guidebooks help travellers choose their route, decide where to stop off, tell them what kind of weather to expect and describe every place they could possibly wish to visit.

It is not easy nowadays to imagine what a fragmentary and fantastic picture of the world our ancestors once had. A glance at the maps produced as late as the fourteenth century in Europe, Asia or the Arab world is enough to show the incompleteness of geographical knowledge and the extent of the mystery which then veiled the contours of the Earth.

A radical change in outlook took place in the fifteenth century when Portuguese navigators began to explore the coasts ofAfrica; when Bartolomeu Dias rounded the southern extremity of the continent in 1487; and when Vasco da Gama opened up the sea route from Europe to the East in 1498. These men, who crossed with astonishment "seas no man had ever sailed before", were plunged into a host of unexpected encounters between the languages, values and customs of peoples meeting for the first time.

The present issue seeks to give a glimpse of this key period when human history assumed global dimensions. An intellectual, aesthetic and technological revolution had prepared the ground for a process which led eventually to a truly global perception of the world. Centuries later the enterprise of discovery would justly be described by the Portuguese poet Fernando Pessoa as a "civilization-creating act".

We have not attempted to tell the full story of this complex act of creation. We have chosen instead to describe some major events and those who played an important role in them, including the Portuguese poet who splendidly immortalized the voyages of discovery in his epic poem The Lusiads, Luis de Camôes.

Without glossing over the difficulties, misunderstandings and conflicts which marked this great human adventure, we have sought above all to define its essential contribution to history: the irreversible discovery of human diversity. 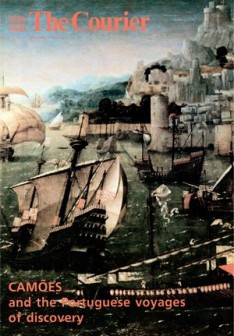