A Century of cinema

For the Unesco Courier, whose editorial goal it is to explore all activities and forms of expression with a universal dimension, the centenary of motion pictures is a golden opportunity. Cinema is, after all, an art that draws sustenance from all others, a protean medium of communication with inexhaustible resources, capable of accommodating the impulses of creators of very different kinds, of reaching popular audiences and of effortlessly crossing geographical and cultural frontiers.

For us this anniversary is an occasion to celebrate with an international tribute to the extraordinary galaxy of talented men and women who have shaped the first hundred years of cinema and have made possible the miracle of film a unique, worldwide artistic adventure involving a vast number of personal aesthetic experiences and reflecting the culture of almost every country in the world.

At the same time it would have been impossible to ignore the tensions, the unresolved problems, the obstacles and threats that are also part of the story. Is the cinema an art or an industry? Can it be both at once? And if so, on what conditions? Where ruthless market forces prevail, is the American film industry bound to come out on top? Are its weapons purely economic? What chances does the cinema stand against today's television and tomorrow's multimedia?

These questions often arise in the following pages, but they do not overshadow the immense pleasure that the cinema has brought to all those of us who have lived in the twentieth century. All the gifted artists who have been kind enough to contribute to this issue bear witness to this, as do the photos we have selected from film libraries all over the world, a veritable family album from the world of cinema. 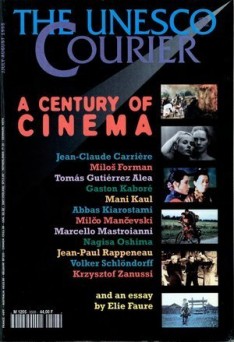