The Competitive world of sport

Sport has become a universal language. At some time or other in their lives many people respond to its appeal whether as a form of recreation, a way of keeping fit, or a test of stamina. As a mass social phenomenon, it provides an outlet for popular enthusiasm and an opportunity for the individual to join in the life of the community. On some occasions as during World Cup competitions and the Olympic Games it cuts across political and ideological frontiers and creates a ferment of excitement shared by a public scattered all over the planet.

But the development of sport as a worldwide phenomenon has only come about because of the increasing importance attached to one specific aspect of sport top-flight competition to the detriment of sport as a form of play and a means of education. It has also resulted from excessive concentration on a limited number of spectacular events, a process which has in turn exposed sport to evergreater attention from business and the media.

In recent decades these trends have sometimes led to excesses and abuses: a worship of professionalization which can cause athletes to specialize at a very early age, become slaves to overloaded training and competition schedules, and fall prey to doping; wheeling and dealing inseparable from the development of spectator sport on a colossal scale; outbreaks of fanaticism and chauvinism that are sparked off by the hot-house pressures of competition and are used, in some cases irresponsibly, to give vent to social or national frustrations.

Some people believe that these are reasons to condemn sport out of hand. However, they tend to forget that in spite of everything sport still has many things to offer: unique opportunities for personal fulfilment; a magnificent training in community spirit; a civilized form of confrontation between individuals and groups. All this forms a subtle blend in which the desire to outperform others finds expression in complete respect for rules that are the same for everyone, in which competition brings adversaries together, and in which victory and defeat are fused in love for an art practised communally.

For UNESCO, one of whose tasks is to uphold the ethical standards on which sport is based, sport will continue to be a way of bringing together people from all over the planet as long as it remains the "school of nobility" which Pierre de Coubertin, a century ago, saw as its prime vocation. 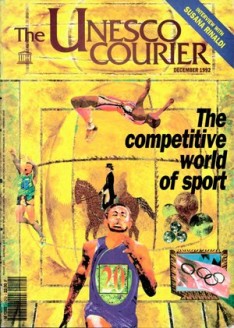