Conquest of the desert

The infinite variety of life is one of the most intriguing topics for nature-lovers and for scientists whose lives are devoted to understanding the world. Part of its fascination is the amazing adjustment of plants and animals to the various conditions of living. Through countless generations of the slow process of mutation they have gradually altered not only their habits but their anatomy and physiology to fit them for life in the depths of the sea, the jungle tree tops or even beneath the soil. Each species is marvellously fitted to a specific type of environment, but each is also unfitted for life in a different one.

There is only one species of animal that has the ability to live anywhere on earth except under water: man. He has adapted not so much by changing his nature in the course of generations as merely by adapting the environment to himself by inventing clothes for cold weather, shelter against the storms, fire for making hard foods edible, and tools to master the soil. Man has made almost every patch of the earth somehow habitable.

Yet there are large areas that are almost deserted by man and where only those men live whose wants are meagre and who thrive on solitude. "'Terra deserta", the Romans called these deserted areas whence the modern word "desert". They need not be hot, for there are deserts in the Arctic and on cold high plateaus. But a desert is always dry, its vegetation is sparse, animals rare and men poor. In the deserts, neither ancient nor modern science has accomplished much improvement.

One practical definition of science is that it is the best use of the human intelligence to improve the conditions under which we live. Thus, the desert still is one of the greatest challenges to mankind and to science. More than one fourth of the entire land area of the earth is almost useless because it has too much sun, not enough rain. To improve living conditions in the desert may require improving the climate or at least the weather, and both of these have everywhere been beyond man's control.

Before science can act it must understand. It needs to know the cause of dryness and the reasons for lack of rain; it must understand the geological structure of rocks and the types of soil and of sand in order to find underground water. It must understand what means are used by desert plants and animals to thrive and live so happily in austerity; it must know the wind and the sun and know how to harness them and use their energy to improve living conditions. Furthermore, the problem is so vast that it involves the lives of people of at least 37 nations. No single nation can accomplish much but what one does can benefit all. The problem of the arid lands is therefore an international one, to be solved by the best use of the human intelligence on a world scale. It has for this reason demanded the attention of the United Nations Educational, Scientific and Cultural Organization since it was first organized.

Practical progress has been slow, but the growth of understanding has not. Small successes in adjustment have appeared, such as the use of dew for plant growth; applying the lessons that the camel can teach; the prevention of the spread of the desert through misuse of the marginal areas. Further successes seem imminent such as the location of underground water, the use of the wind for operating local wells, the use of sunshine for cooking, and perhaps even the production of fresh water from the sea for use in irrigation. This is one of the liveliest of the scenes where science is now at work.

Because so much of UNESCO's efforts has gone into this many-sided problem this issue of the UNESCO Courier is a review of the present status of the great campaign to make the deserts habitable and to extend man's realm to the farthest, driest and in many ways pleasantest regions of this planet.

Discover other articles in our Digital Supplement devoted to deserts and desertification. 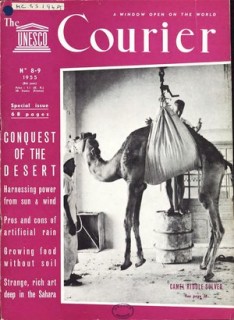