"Is it possible to speak of 'revelation' in other [i.e. non-Christian] religions?" asked an article published in a recent issue of the Jesuit journal La Civiltà Cattolica. The answer appeared to be yes. In other words, the voice of God is heard in other sacred writings than the Bible.

Perhaps not everyone will grasp the full significance of this viewpoint. Yet it marks a real break with a tradition that runs through the history of the revealed religions. It is true that a few great thinkers down the ages have dared to express such thoughts, in some cases risking their lives to do so. More recently, attempts to promote a rapprochement between religions have been based on the same premise, but never until now has it been endorsed in a journal close to the Holy See.

There has always been a very strong temptation for the authorized interpreters of each of the revealed religions to consider themselves the sole repositories of the divine message, even though they may argue among themselves about its exact meaning. All too often this has sown discord between different religious communities, each one claiming to be the only defender of God's true word. This situation exists today in many societies in the throes of crisis, where an extremist interpretation of a religious message can be used to mobilize and intensify the passions unleashed by a community's quest for identity.

This is why the article in La Civiltà Cattolica should be welcomed. In acknowledging that all the world's great religions have access to revelation it accords equal dignity to all their followers, i.e. equal rights to respect and to a hearing. It is thus consistent with an intellectual approach that advocates in all fields, not only that of religion, open-mindedness and fraternity in opposition to the tyranny of exclusive truths: a higher spirit that unites people and the world against the divisions and afflictions of sectarianism.

Something of this spirit informs the pages of the present issue devoted to dance. Readers may even feel that some of this month's contributors, such as Maurice Béjart, help to explain its mystery. 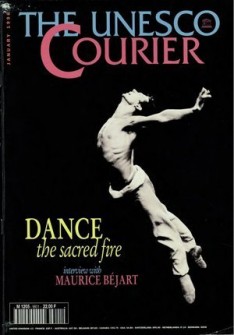