This year marks the centenary of the death of CharlesDarwin, the man whose theory of evolution by natural selection was unquestionably the most important single scientific innovation of the nineteenth century. Our purpose in this issue ofthe Unesco Courier is to pay homage to this great scientist whose work laid the foundations of modern biology; we leave to others the task of assessing the moral and religious repercussions of a theory that one modern philosopher has described as a "metaphysical research programme".

In contrast to traditional creationist theory, which maintained that all forms of life had existed virtually unmodified since they were created at the beginning of biological time, Darwin's theory of evolution held that existing species, including man, had evolved over billions of years from a single primitive form of life.

Yet when The Origin of Species was published in 1859, evolutionary theory already had a long history; Darwin himself, in the Historical Sketch with which he prefaced later editions of The Origin, listed over thirty predecessors. Why then is Darwin honoured above all others as the symbol and the primary force behind the greatest transformation ever in the biological sciences?

The answer is that whereas earlier evolutionary theories had been speculative in character, Darwin, in The Origin, marshalled an overwhelming array of evidence to support his claim that evolution could be seen to have occurred and that natural selection was its driving mechanism. On reading this evidence Thomas Huxley, who was to become Darwin's most able champion, remarked admiringly: "How stupid not to have thought of that!"

Publication of The Origin of Species, however, sparked off a revolution not only in the biological sciences but also in western man's philosophical, moral and religious conception of himself. Although Darwin declared that he could "see no good reason why the views given in this volume should shock the religious feelings of anyone", his message threatened the whole edifice of rational Christian thought as represented by Natural Theology, since it denied the notion of inherent progress and purposiveness in evolution and introduced the spectre of randomness.

Samuel Wilberforce, bishop of Oxford, denounced "the degrading notion of the brute origin of him who was created in the image of God". Less extreme, but reflecting the general sense of shock at this assault on the genteel standards of Victorian English society, was the comment of the wife of the bishop of Worcester: "Descended from the apes! My dear, let us hope that it is not true, but ifit is, let us pray that it will not become generally known."

Comparison with the Copernican revolution is inescapable. In the words of Sigmund Freud: "Humanity has in the course of time had to endure from the hands of science two great outrages upon its naive self-love. The first was when it was realized that our earth was not the centre of the universe, but only a speck in a world system of a magnitude hardly conceivable... The second was when biological science robbed man of his particular privilege of having been specially created and relegated him to a descent from the animal world."

Read this issue.Download the PDF. 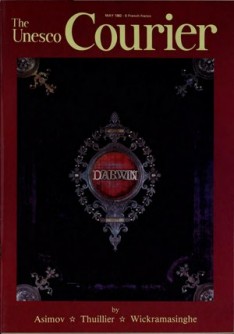