Disarmament education: a farewell to arms?

In April 1979, the Unesco Courier devoted an entire issue to a United Nations report on "the economic and social consequences of the arms race and of military expenditures". In that issue we showed that, far from slowing down, the arms race is gathering momentum and is swallowing up on a vast scale resources (today nearly a million dollars are spent every minute of every day on armaments) that are urgently needed for development.

This state of affairs is fraught with the most terrible danger to human life, indeed, to the very survival of the human species. Although since 1945 world war has been avoided, for how many days over the past thirty-five years have the guns really been silent? The axis of conflict, which still involves the industrial powers, has shifted towards the poorer countries where men, women and children continue to die as a result of war.

International action is urgently needed and Unesco's role is clearly defined in its Constitution which assigns it the task "of advancing, through the educational, scientific and cultural relations of the peoples of the world, the objectives of international peace and of the common welfare of mankind for which the United Nations Organization was established and which its Charter proclaims".

Since its inception, therefore, Unesco has been striving to create a climate of world opinion, especially among the younger generation, in favour of disarmament through the twin channels of information and education. Yet the term "disarmament education", although it covers part of well established domains such as peace education, world order studies and education for international understanding, is a new expression which was first officially used at a meeting of experts convened by Unesco in April 1978 on Obstacles to Disarmament and Ways of Overcoming Them.

The experts defined the purpose of disarmament education as being to promote the goal of general and complete disarmament; this would involve, they stated, bringing up youth in a social climate favourable to this goal (education for disarmament) and training and instruction regarding the various historical, political, economic and other aspects of the problem of disarmament in international relations and domestic policy (education about disarmament). They also recommended the holding of a world congress with the task of proposing measures aimed at the establishment of specialized education in favour of disarmament. This proposal was put before the Tenth Special Session of the United Nations General Assembly, in May 1978, by Unesco Director-General Amadou-Mahtar M'Bow, and received the Assembly's whole-hearted support.

The World Congress on Disarmament Education was subsequently held at Unesco headquarters In Paris In June this year and was attended by some 250 participants and observers from all over the world. Its findings are largely reflected in this issue of the Unesco Courier. 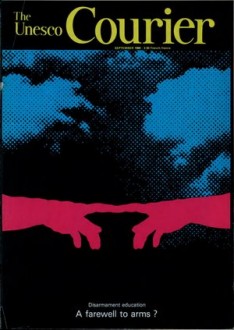