Diversity, a synonym for culture

This year, UNESCO’s celebrations of World Day for Cultural Diversity (21 May) were quite exceptional. Throughout the month of May, dozens of artists came from all over the world to demonstrate the wealth of humanity’s cultural diversity, as part of the first International Festival of Cultural Diversity. The Festival was held simultaneously in several countries, as well as the Organization’s headquarters, and was clear evidence of the fundamental bond between culture and diversity, as this month’s UNESCO Courier shows.

The relationship between culture and diversity is one of mutual foundation. Culture refers both to one’s original way of being, recognizable through one’s arts, one’s signs, and the rightful pride one takes in being akin to no other. Yet culture is also a gateway to all that is profoundly dissimilar, to the enchantment of the unknown. And as such, it is at once enhancement of diversity and continual construction of universality, and in both cases always incomplete and inexhaustible.

Thus it is simply a function of diversity – the one which gives it its simultaneous explicitness and profusion. This is the sense in which one might say that there is no diversity without culture and no culture without diversity.

This thought seems all the more convincing as one gazes upon a world on the verge of becoming a space of integrated diversity. Fading are the juxtapositions of countless so-called differences. The Earth we live in today holds only one humanity, perhaps only one living kingdom comprising all the species. And the concept that enables us to reflect on the planet’s critical state of affairs is that of diversity.

It alone derives from universality and accounts for all singularities, treating them as an ensemble – and thus offers to the “the minds of men” a novel approach to their shared condition: one that befits the reality of their common destiny and can replenish their intelligence of the world. UNESCO has been devoted to this pursuit since the adoption of its Constitution and increasingly, of late, in the wake of the 2001 Universal Declaration on Cultural Diversity and of the 2005 Convention on the Diversity of Cultural Expressions. The Festival of Diversity, launched this year simultaneously in various countries and at UNESCO Headquarters, is an opportunity to experience the primordial affinity between culture and diversity.

This issue of the UNESCO Courier echoes the Festival of Diversity and supports its aims. 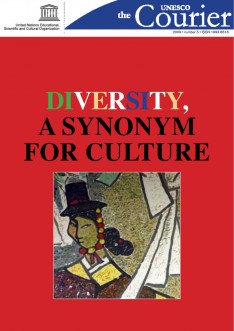