Education for All: halfway there

1990: The Education for All (EFA) campaign is launched in Jomtien (Thailand). The international community pledges to provide quality basic education to all children, youths and adults.

2007: “We are halfway there and we have good reason to be optimistic,” says, in this issue of the UNESCO Courier, Nicholas Burnett, UNESCO Assistant Director-General for Education and director of the just-launched 2008 EFA Global Monitoring Report. Troublesome areas remain nonetheless, notably early childhood education, gender parity and adult literacy.

One reason for delays is the perception of education as an opportunity rather than a right, says Jan de Groof, professor of education law at the College of Europe in Bruges. “When the right to education is flouted, the courts can and must intervene,” he asserts, citing the example of Roma children who just won their appeal at the European Court of Human Rights.

Meanwhile Adama Samassekou from Mali, president of the African Academy of Languages, is fighting much more fiercely for the integration of mother languages at school. “We need a school that is attached to society, not torn from it,” he declares.

But Africa has other problems in education. In Cameroon, for instance, contract teachers comprise 53% of the labor force at primary level. They have as many responsibilities and far fewer rights than their civil service counterparts. How then can they provide quality education? Lawyer-teacher Vincent Bikono tells his story.
On the other side of the Atlantic, Ecuador wants to set the example by greatly increasing its investment in education. Minister of Education Raúl Vallejo Corral presents an overview of the reforms.

Also in Latin America, Guatemala thinks that children who fail their first year of school can be stigmatized for life. For that reason the country, 30% of whose 13 million inhabitants lack literacy skills, launched the campaign “Save the first year”.

And to return to the most delicate aspects of Education for All, David Archer, from the NGO Action-Aid, explains why illiteracy costs more than literacy. Sylvie Cromer, from Lille 2 University, demonstrates that gender inequalities are visible even in mathematics textbooks. Indian Journalist Shiraz Sidhva tells the story of working children in Bangladesh to whom the state is giving the opportunity to succeed. Ann Therese Ndong-Jatta, Director of Basic Education at UNESCO, talks about the Organization’s activities on behalf of early childhood, notably in developing countries where preschool education remains the privilege of the wealthier families.

The features of this issue of the UNESCO Courier offer a photo report on education for girls in Yemen, a country making considerable effort to close the gender gap in schools; and a brief summary of the six Dakar goals. 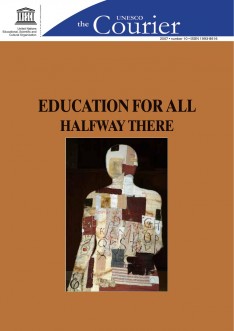