The International Conference on Drug Abuse and Illicit Trafficking, organized by the United Nations and held in Vienna in June 1987, marked a new chapter in attempts by the world community to combat the problem of drugs. In recognition of the importance of the Conference, the articles which open this number of The UNESCO Courier are devoted to different aspects of the drug question including the key role of the prevention of drug abuse through education, one of the activities which UNESCO has been carrying out in this field for over fifteen years.

Action on behalf of the disabled is another important field in which UNESCO is co-operating in efforts to achieve goals set by the United Nations, in this case through the encouragement of educational activities to help the integration of disabled young people into schools and society at large. To draw attention to the importance of such action in fostering the personality development of disabled children and enabling them eventually to participate in society to the fullest extent, we publish a case study from Portugal which incorporates the testimony of two visually handicapped children who talk frankly about their lives.

Also in this issue, the nature of the writer's responsibility in the preservation of peace is analysed in an article by the secretary of P.E.N, the international association of writers, who examines the process whereby words can be used to create false pictures ofwhat he calls the "hereditary enemy", and suggests ways in which writers can destroy these dangerous myths.

New light is shed on the history of urbanization by an article which recreates the historical and cultural context which saw the birth of al-Kufah, the prototype of the Islamic city, and proposes a new approach to the place of cities in Arab Islamic civilization. Also in this issue we look at some of the latest developments in the field of artificial intelligence research and especially the astonishing horizons being opened up by the development of the fifth generation computer.

Finally, 1987 marks the bicentenary of the birth of a major figure in cultural history, Vuk Stefanovic Karadzic. As a tribute to Karadzic, the father of Serbo-Croat literature who preserved treasures of the folk tradition, reformed the alphabet, and won a European reputation during his lifetime, we publish a profile of him and a short selection of extracts from his works.

The new world of artificial intelligence, by Domenico de Gregorio 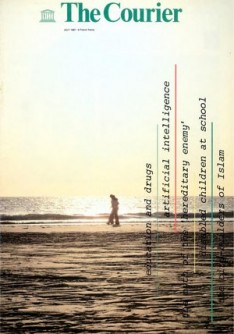