It is a cruel paradox that the cinema, the most popular art of the twentieth century, should also be the most threatened. No art form has been (and continues to be) a prey to such destruction which, whether wilful or accidental, has caused losses on a massive scale.

The disastrous implications of these losses for the memory of mankind are now fully appreciated. In this issue of the Unesco Courier, which is entirely devoted to the safeguard and preservation of the world's film heritage, the two major causes of destruction are analysed in detail. One stems from attitudes of mind to films and the cinema; the other has to do with the chemistry of motion picture film.

The cultural value of the cinema was ignored and even denied for far too long, and the film was considered exclusively as a commercial commodity. In many countries huge quantities of film were thrown onto the scrap-heap, wantonly despoiled in ruthless and reckless waves ofdestruction unleashed whenever they seemed to be required by changing tastes and fashions in film and new technical developments.

Films are at the mercy of the support on which they are recorded: this support is always fragile and has a life-span that may be limited unless certain precautions are taken. "Chemical death" may strike very quickly and has played havoc with the films which were produced before the 1950s and recorded on nitrate material; in the case of these films losses have assumed the proportions of a cultural catastrophe.

A handful of pioneer film enthusiasts responded to the situation early on, bidding to win acceptance of the cultural value of the cinema and, often working in a climate of hostility, to preserve films they considered outstanding in collections which were the imperfect but useful prototypes of modern film archives. The International Federation of Film Archives (FIAF) was founded before the Second World War. The creation of the Federation, with its centralizing role, was the first step towards a world film archive.

As the years have passed it has become increasingly clear that this form of defence of the cinema, if it is to be effective and comprehensive, can only be achieved as a result of international cooperation. In the last decade or so there has been a ground-swell in this direction which led in 1980 to the adoption by Unesco of a "Recommendation for the Safeguarding and Preservation of Moving Images" which fully recognized the status of an art which had siiffered unjust treatment, and proposed to the international community measures for protecting both the heritage and the future of this great medium of communication.

In April of this year, a consultation hosted by the Austrian Film Archive and the Austrian Film Museum in Vienna was organized by Unesco in collaboration with FIAF, the International Federation of Television Archives (FIAT), the International Association of Sound Archives (IASA), and the International Film and Television council (IFTC). The meeting brought together some twenty representatives of archives from all over the world to draw up a tenyear programme of action and to prepare a questionnaire enabling the effects of the Unesco Recommendation to be evaluated in 1986.

Safeguard and rescue these are two strands in the pattern of approach and action evoked, as usual from a broad international perspective, in this issue of the Unesco Courier in the hope that the fragile art of film may survive and flourish. 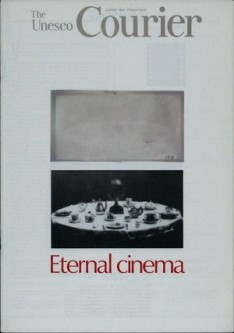