Whether composed by unknown poets, transmitted orally and reshaped from century to century, or written by a single known author, epics relate to the birth of a culture, the early days of a nation or an empire, sometimes even to the creation of the universe. Their setting is often an age when human beings first began to exist outside the realm of the gods. Their heroes are denizens of a zone midway between the temporal and the eternal.

These heroes may no longer be immortal, but they are superhuman. They no longer claim to be omnipotent; they are fallible, they are capable of hesitation, failure, love, hate and suffering. But they are endowed with exceptional qualities of determination, intelligence and energy with which to face their destiny, overcome adversity, and change the order of things. They are both explorers of the known world and founders of new cities.

Because of these qualities, epic heroes have always been a central part of the shared experience of traditional societies, which they have furnished with psychological models, ethical, aesthetic and religious values, and personal examples for everyone to reflect on. Larger than life, freed from some of the constraints that weighed on their fellows, epic heroes have been a source of inspiration for many, capturing their imagination and lifting them above life's tribulations and disappointments.

In village, town and city, bards, poets, storytellers, strolling minstrels and griots sang of the exploits of these legendary heroes, relieving the monotony of everyday life, keeping alive the community spirit, and maintaining from generation to generation the continuity ~1 of the national memory.

The epic has thus survived the vicissitudes of history. But in the last few decades many J barriers to communication have disappeared from the world scene; the image has overtaken the written word; the storytellers of old have been replaced by television; the mass media have presented to a world audience individualistic heroes who seek a destiny in which the traditional and the sacred have no part. How has the epic reacted to this shock?

As a factor of social cohesion in traditional communities, it slowly lost ground. On the other hand, it took on a new lease of life and reached a far wider audience as the theatre, the cinema and television seized on the opportunity to adapt versions of ancient legends and transpose their themes to different periods and settings. An increasingly wide public made the astonishing discovery that there were affinities between the world's great epics. Spectators in places as far apart as Avignon or Caracas felt an immediate rapport with the heroes of Persian or Zulu epics and saw similarities between epic figures which transcended time and place.

They thus discovered a truth which, although very ancient, is only now being fully revealed: that the dreams of our past are rooted in kinship, not antagonism, and that they express, in an infinite variety of contexts and languages, fears of the same mysteries and hopes for the same joys.

Discover other issues and articles on Poetry in the UNESCO Courier. 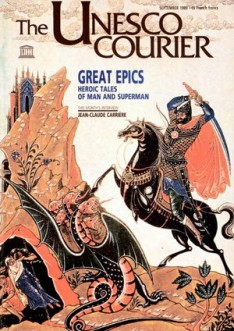