Caravans slowly wending their way across desert wastes; stately galleons laden with spices sweeping before the Trade Winds en route for the ports of western Europe; supertankers the size of small towns bringing oil to an energy-hungry world... The bold lines traced across the globe by the world's great trade routes, past and present, readily conjure up images like these. They also raise the question of the immense contribution that long-distance trade has made to the shaping of world history, the spread of cultures and ways of life.

The articles in this issue of the Unesco Courier are an attempt to rediscover some of the great arteries for the flow of goods and ideas which have since early times linked distant lands and peoples. Some of these links have been enduring: modern highways that are a natural outgrowth of ancient road systems that developed with commercial expansion; modern cities owing their location to an ancient pattern of trade. Some have been more transitory: the trade network built in the Mediterranean by Carthage in Antiquity came to a sudden end when the city was reduced to rubble by Rome aspiring to world power. Bruges, on the other hand, was a city which brilliantly survived commercial decline to become a glittering centre of art and, today, a model of urbanism integrating old and riew. Some, such as the overland route which brought tin from the British Isles to the bronze craftsmen of Ancient Greece, and the paths by which amber from the shores of the North Sea filtered southwards, remain in places tantalizingly elusive, a challenge to the skills and imagination of modern archaeologists. As for others, such as the old east African trade patterns which existed long before the arrival of the Europeans in the fifteenth century, their importance is only now beginning to be understood. And perhaps the most classic trade route of all was also the most versatile: the Silk Road which for 1,500 years linked China to the West and was a conduit for technological innovation and religious change as well as commerce.

But there is a darker side to the story which should not be forgotten. The world's great trade routes have been the focus for bloody struggles for supremacy, and the channels of infamous forms of traffic and exploitation: the slave trade.

The preparation of this issue, on a theme, suggested by the Urdu edition of the Unesco Courier, which more than most reaches across the oceans and continents, has been largely due to the magazine's own form of international exchange close collaboration between the staff of its worldwide network of editions now published in twenty-seven languages. 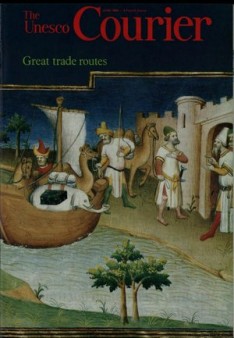