Highlands and islands: ecosystems in danger

In the fascinating kaleidoscope of peoples and cultures that make up our world highlanders and ¡slanders stand out as a breed apart, characterized by a fierce independence of spirit and a profound attachment to their place of origin.

For the islander the physical barrier of the sea acts as a permanent reminder that he is distinct from the man of the mainland, cut off from easy access to many of the resources readily available to his continental counterpart and untouched by the cultural waves that ebb and flow ceaselessly across land frontiers.

In the fastnesses of his upland home, those mountains that rise like landlocked islands from the continental plains, the highlander too is often so cut off from the plainsmen below that, even in today's world of instant communication through radio and television, his cultural patterns retain their distinctive forms.

But independence of spirit born of isolation is not all that unites highlanders and islanders. The peoples occupying these microcosmic areas have shaped some of the most harmonious landscapes in the world, often achieving an equilibrium, a partnership with nature, that has lasted for centuries. Today, in a shrinking world, from the Alps to the Andes and from the Mediterranean to the Pacific, the pressures of population growth and movement and the demands of development have placed this equilibrium in danger. 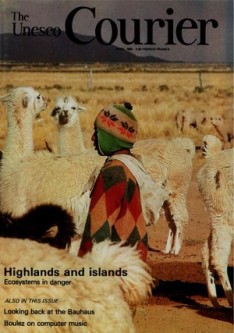