Human rights for all

On December 10, 1948, the Universal Declaration of Human Rights was adopted by the General Assembly of the United Nations meeting in Paris. At that time, Unesco's Director-General, Jaime Torres Bodet, hailed this great event in these words:

The Declaration of 10 December 1948 is more than an historical summary, it is a programme. Every paragraph is a call to action, every line a condemnation of apathy, every sentence a repudiation of some moment of our individual or national history; every word forces us to scru¬ tinize more closely the situation in the world today.

The destiny of mankind is an indivisible responsibility which we all must share. So long as it remains possible to flout with impunity even one of the rights of one single human being, the United Nations Declaration will continue to accuse us all of cowardice, sluggishness, laziness, and to remind us that we are lacking in human charity. So long as the greater part of the human race continues to live face to face with hunger and injustice and to die in squalor and ignorance, the Declaration adopted in Paris will represent nothing more than a remote ideal.

To make the Declaration known everywhere is to wage a worldwide campaign for a life worthy of man, to whom the governments have dedicated this Declaration, not in mere lip service, but in solemn recognition of their duties to civilization and to humanity.

To help States carry out these duties in the field of education, science and culture is the proud mission of Unesco. What nobler task could be assigned to culture, education and science, than to make all men the guardians, and hence the fervent exponents, of the Universal Declaration of Human Rights ? 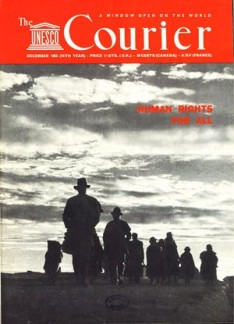