This year, half-way through the Decade for Women proclaimed by the United Nations in 1975, women from all over the world are taking stock of their situation, notably at the World Conference of the UN Decade for Women being field in Copenhagen from 14 to 30 July. The purpose of the Conference is to evaluate the progress made in implementing the ten-year World Plan of Action for the advancement of women which was adopted by the International Women's Year Conference at Mexico City in 1975, and to establish an action programme for the second half of the Decade. Along with other international organizations Unesco has been working to fulfil those recommendations of the Plan which fall within its fields of com¬ petence; some of these Unesco initiatives have given rise to material appearing in this special issue of the Unesco Courier.

Several of the articles published here are dominated by the presence of a figure who might be called the "invisible" woman. She may be invisible because she has been legislated out of existence by the inhuman apartheid machine; or because the economic value of her work in the home or in other unpaid activities is ignored by the various "indicators" which define the profile of her country's social and economic situation; or as a result of some other form of discrimination. However there are signs today that her situation may be changing through the efforts of the world-wide movement for women's liberation. Not only is there an intensification of research into women's status within different cultures and regions but new methods of inquiry are being developed and new questions are being asked by women social scientists who are removing the cloak of invisibility from women who have been denied their full and equal participation in social, cultural and political life.

See other women's issues in the UNESCO Courier 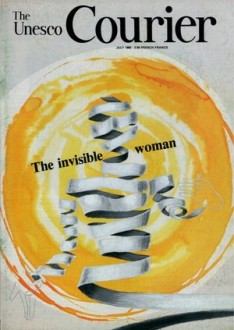