"Our focus doesn’t have to be on changing the whole world, just changing our world,” says American actress and singer Monique Coleman, appointed United Nations “Youth Champion” for the International Year of Youth 2010-2011 (pp. 7-8).

That is exactly what young people are doing to change the things that need changing. At the beginning of 2011, they rose up against existing political regimes, first in Tunisia (pp. 9-10) then in Egypt (pp.11-12), giving the rest of the world a good lesson in democracy. Social networks spread the movement to other countries in the region, also rousing European nations such as Spain (pp. 13-14). Their tools, theirs slogans and their goals are practically the same everywhere. They are fighting for jobs, social justice, free education and health care, freedom of expression and above all democracy.

The inspiring news of the “Arab Spring” went around the world, held up as a symbol of a peaceful revolution led by youth. Elsewhere in the world, young people mobilize in different ways, as for example the students in Czechoslovakia who have decided to “chip in” and have their say in their country's affairs (pp. 16- 17), or the South African businesswoman who created a social network for disadvantaged schools (pp. 18-19), and the young people who are hopeful they can vanquish racism, xenophobia discrimination and conflict through the “miraculous weapons” of art (pp. 21-30).

One common denominator is solidarity, illustrated in the activities of young volunteers, scouts and athletes, but also in the heartrending stories of the Ugandan “stars” (pp. 34-35) and a young Pakistani sughar (pp. 36-38). As for Japanese youth, who displayed great generosity during the March 2011 disaster, they have precipitated radical changes in the old value system centered on economic growth (pp. 39-40).

Finally, we are not surprised to discover that young people are seriously concerned about the future of the environment. Particularly sensitive to climate change issues, the new generations are capable of waging war against various forms of ecological inertia. From the European Union to China, Mexico and Peru (pp. 40-49), thousands of young people are using their diverse talents to work for a healthier planet.

To conclude this issue produced entirely by young writers we asked Egyptian filmmaker Khaled Youssef to give us his views on “Arab Spring” (pp. 50-52).He shares his vision of the events that rocked his country in the beginning of the year and their impact on the world, society and international politics.

Discover other issues on youth in the Courier. 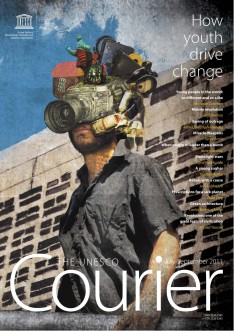