The Knowledge economy: when ideas are capital

A two-kilo cake contains twice as much flour, eggs and sugar as a one-kilo cake. A cake can only be eaten if it’s within reach of hungry hands and mouths, and once it’s been eaten it’s all gone.

A copy of a computer program, on the other hand, only has a marginal cost, that of its physical support or its transfer.Internet users thousands of kilometres away from each other can “consume” it simultaneously. And it doesn’t wear out when it’s been used.

This comparison encapsulates the difference between the industrial economy and the “knowledge economy”,which is also known variously as the “intangible economy”,“the weightless economy”, the “immaterial economy”or simply the “new economy”. In this economy, ideas, images and knowledge are more prominent than physical products, machines and raw materials. Just as harnessing energy spawned industrial society, so mastery of data processing and transmission has given rise to the knowledge economy.It is particularly strong in four leading sectors: information and communication technologies; intellectual property — patents, brand - names, advertising and financial services; databases and recreational services; biotechnology.

Does this mean that traditional economic rules are now dead and buried,as the gurus of the new economy maintain? Will these new technological tools increase or reduce inequalities worldwide? Will the new work opportunities be personally more rewarding? The extent and the consequences of the rise of the knowledge economy, and even its very nature, are still being hotly debated. 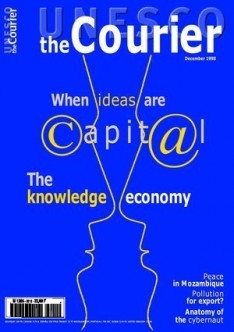