The Last prince of poets: Goethe

The Courier is happy to associate itself with the world celebration of the bicentenary of Goethe, who was born at Frankfort-on-Main on August 28, 1749. As its special tribute to the great German and European poet and thinker, Unesco has asked men of letters of several countries to contribute chapters, written for the occasion to a volume entitled"Unesco's Homage to Goethe on the Second Centenary of his Birth", which will be published on his birthday.

Limitations of space prevent the Courier from quoting from all of these contributions, but extracts from some of them are given in this issue. The memorial volume will be published simultaneously in English, French and Spanish editions, each containing numerous illustrations.

We also print on this page part of the letter in which Dr. Jaime Torres Bodet. Director-General of Unesco, asked for contributions to the memoria'volume, and an extract from the translation of the first part of Goethe's Faust by the poet Shelley, which though only a fragment is perhaps the finest rendering into English of any of Goethe's world. 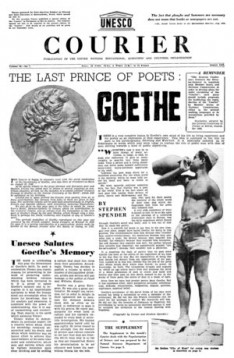