861 million adults — nearly one sixth of the world’s population — cannot read or write. Most have never attended school or did so only for a brief period. Grinding poverty, but also the wars, famine and natural disasters that displace populations for years or more, are generally to blame, but not always. Available evidence suggests that functional illiteracy – the inability to decipher labels or the ordinary instructions required to fill out a form or apply for a job – affects as many as one quarter of citizens in some of the world’s more affluent societies. More and better educational facilities and systems are required to help a huge number of our contemporaries out of the poverty trap to which illiteracy, among other factors, has confined them.

Making good on the promise of sound primary education for all children everywhere by 2015 – the goal solemnly proclaimed at the Dakar World Education Forum in 2000 by the representatives of the vast majority of world’s States — is obviously the place to start. But the progress recorded so far gives little cause for optimism. Of the 164 countries that committed themselves to achieving education for all by 2015, 70, it now appears, may fall short. Most of them are in sub-Saharan Africa, but also included are Bangladesh, China, India and Pakistan — four countries which together account for 61 percent of the world’s illiterate adults today.

In this, its second issue, UNESCO’s new Courier, in cooperation with a team of international correspondents from The Times Education Supplement in London, takes a hard look at the issues to be addressed and some of the challenges to be overcome in the course of the United Nations Literacy Decade (2003-12). The picture it draws is sobering, but not hopeless. New approaches which seek to eliminate cultural and linguistic barriers, and to tie literacy training with activities critical to people’s daily lives, have shown considerable potential in the countries where they have been introduced. Better yet, two of those countries, we discovered, are Bangladesh and India. 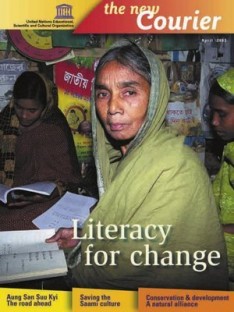