The Living culture of the Tamils

This issue of the Unesco Courier presents through a mosaic of texts and pictures some aspects of the life and culture of the Tamil people, the overwhelming majority of whom live in the State of Tamil Nadu in the extreme southeast of the Indian peninsula.

This culture is remarkable on many counts, not least because Tamil is the oldest ofIndia's modern languages it has been cited as "perhaps the only example of an ancient classical tongue which has survivedfor more than 2,500 years with its basic structure intact". In addition to Tamil Nadu, where it is the State language, Tamil is also spoken by an estimated four million people who live in Sri Lanka, Burma, Malaysia, Indonesia, the Socialist Republic of Viet Nam, parts of East and South Africa, Guyana, and islands in the Indian Ocean, the South Pacific and the Caribbean.

The present issue, which consists largely of contributions from Tamil writers and scholars, looks at the present as well as the past of a developing society searchingfor a fruitful relationship between ancient traditions and modern life, between city and countryside, between indigenous forms of creativity and outside influences.

In a scene-setting article current trends in the social and cultural life of Tamil Nadu are charted by S. Ramakrishnan. Other aspects of the contemporary situation are evoked in articles on modern movements in Tamil literature and on the changing status of women, and in a text in which poet and novelist Sundara Ramaswamy captures something of the flavour of everyday life.

Turning to the past glories of Tamil culture, François Gros examines the highly sophisticated techniques of sangam poetry, the very early Tamil writings supposedly produced in three sangams, or academies, in the city of Madurai. Other distinctive historical contributions. of the Tamils to world culture are the great Hindu temples with their towering gopuram (pyramidal gateways) and decorative sculptures, and the remarkable bronze images of Hindu divinities. In addition to an analysis of these achievements, we have discoveredfor our readers a littleknown text in which the great French sculptor Auguste Rodin thinks aloud as he contemplates with an artist's eye a masterpiece of Tamil art, a bronze statue of Siva Nataraja, the Lord ofthe Dance.

Finally three areas in which past and present are one: the cult of local gods and heroes whose colourful statues adorn the villages of Tamil Nadu; Tamil gastronomic traditions; and the classical dance known as Bharata Natyam which was for centuries performed in the great temples and which today, brought to the stage, is captivating audiences in Tamil Nadu and in many other countries too. With this issue the Unesco Courier remains faithful to its vocation to promote intercultural contact and to make the achievements of the world's great' cultures more widely known. 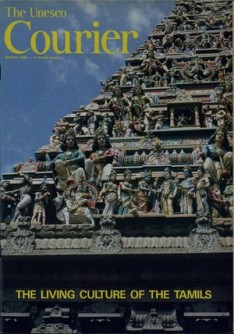