Man and nature: living in harmony

The geographic, economic and sociocultural context of biosphere reserves demand particular attention, as do the innovative approaches to research subjects, conservation and sustainable development. The 22 new reserves in 17 countries which have joined the global network of biosphere reserves constitute an emblematic example of UNESCO’s work towards sustainable development through the conservation of biodiversity and cultural diversity.

This issue of the UNESCO Courier focuses on these new reserves which have been called to play a role in the battle against the erosion of biodiversity and the loss of natural ecosystems, the impact of climate change and rapid urbanisation.

The concept of biosphere reserves was created in 1974 within the framework of UNESCO’s Man and the Biosphere (MAB) Programme. The network was born two years later. While the concept originated in the protected areas realm during the 1980s it increasingly encompassed the idea of sustainable development. Understanding people as integrated in the biosphere, it promoted a beneficial interaction between societies and their environment.

Following the 1995 Second International Congress on Biosphere Reserves in Seville, Spain, three overarching goals of the biosphere reserves were clearly defined in the Seville Strategy and the Statutory Framework of the World Network of Biosphere Reserves. These include conserving both biological and cultural diversity, fostering innovative approaches to sustainable economic and human development and providing logistic support by facilitating research and monitoring, as well as education and training.

In order to meet their goals, the biosphere reserves are divided into three zones: one or more core areas dedicated to conservation of genetic diversity of species and of the ecosystem; a clearly identified buffer zone used for cooperative activities compatible with sound ecological practices; and an adaptable transition area that promotes the creation of partnerships for sustainable development.

Last year, the 3rd World Congress of Biosphere Reserves (Madrid, Spain) adopted the Madrid Action Plan for Biosphere Reserves (2008-2013) recognizing the need for developing models for global, national and local sustainability. This provides the framework for biosphere reserves to become training grounds where global principles of sustainable development are translated into locally relevant praxis, particularly when it comes to addressing the major global challenges such as loss of diversity and ecosystem services, climate change and rapid urbanisation.

Natarajan ISHWARAN, Director of the Division of Ecological and Earth Sciences (UNESCO) 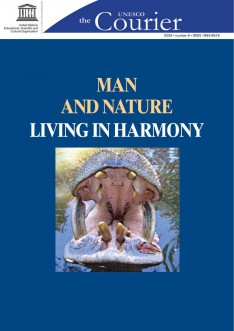