The Marketplace: past and present

It has become virtually impossible to live in isolation from the marketplace. Our needs have become so diversified that they can only be met by constant recourse to products, services, finance and information available on the market. And market transactions have become so intensive and so far-reaching that they are now planetwide. One might say that the pulse of world economic activity today is measured by the state of the market.

It has not always been so.

For thousands of years the market was only of marginal importance. On the one hand it brought into contact separate, self-sufficient communities which exchanged among themselves goods that were merely ancillary, inessential to their internal balance. On the other, the people who engaged in these transactions attached less importance to economic considerations than they did to the imperatives of religion, custom and lineage that governed their lives.

But even within these limits, the market played an extremely important role as a channel of communication. It was the only opportunity for closed communities to open their doors, however briefly, to the outside world, make contact with others and catch a glimpse of human diversity. In the long run, trade promoted the circulation of ideas, technical innovation and productive work.

In the modern age the status of the market changed. It ceased to be a mechanism of secondary exchange and became instead a mainspring of social activity, the regulator of production. The economy hitherto the servant of non-materialistic ends which the group considered sacred became a law unto itself, gradually infiltrating into all areas of life, harnessing everything within reach to its purposes and eventually transforming all established values including cultural, traditional and moral values into commodities that could be bought and sold.

Some reacted to this change by treating the market itself as sacred, regarding it as an impartial power governed by impersonal laws that would, via competition, inevitably encourage the best and penalize the mediocre. However, a closer look leads to the conclusion that while the market acts as an economic regulator and rationalizer, it tends to develop a network of inegalitarian relationships within which the law of the strongest triumphs over the spirit of reciprocity.

In fact, the market can be seen as a kind of frontier area inhabited by two contradictory principles freedom and inequality between which only imperfect compromises can ever be made. A no-holds-barred free market is in fact a "free-for-all", a confrontation between strong and weak leading ultimately to situations where competition ceases to exist, thus jeopardizing the very principle of freedom and resulting in the impoverishment and exclusion of more and more economic agents. Beyond a certain threshold, the process breaks the bonds that hold society together and even, taken to extremes, makes it impossible for commercial activity to continue. And so, the argument goes, there must be a counterweight to market forces; the law of the market must be contained and regulated by political bodies which endeavour to maintain a certain balance between unbridled economic freedom and unchecked inequality.

Several attempts have been made this century to strike such a balance. For a wide variety of reasons, most of these attempts have failed.

This explains why in the past few years all kinds of attempts to liberalize markets and weaken the ideological basis of political interventionism have made great strides. The globalization of financial, technological and information flows, in these conditions, has created a highly volatile market that knows no frontiers, is prone to unpredictable developments and rapidly changing situations. In this globalized market competition favours big transnational groups (while not preventing the emergence of new pockets of prosperity) and no international body seems able to control economic behaviour or arbitrate, politically or legally, the conflicts resulting from it.

The globalization of corruption, siphoning off drug money and feeding international crime, is one dramatic symptom of this state of affairs which is corroding the foundations of democracy and undermining familiar religious, ethnic and national landmarks. It should come as no surprise that two very different trends are developing in response to this widespread corruption the strengthening of democratic control mechanisms and recourse to the dictatorship of closed identities.

The marketplace is thus a crossroads, a meeting place of some key issues of the late twentieth century. In reporting on this crucial phenomenon we have tried to shed light not only on the ways in which it has changed and is changing but also, and above all, on its contradictory aspects. 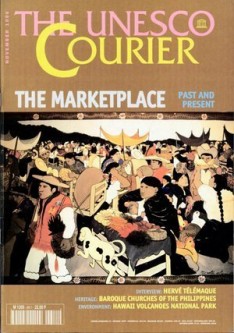