The Media: ways to freedom

Until fairly recent times, knowledge was regarded in most societies as a privileged possession, an adjunct to the power of kings, priests and mandarins. It was transmitted confidentially from generation to generation by word of mouth or in jealously guarded esoteric texts which were only intelligible to initiates.

The story is told of a certain king of ancient Persia who passed sleepless nights when he learned that the ruler of a nearby Indian land had compiled a written anthology of tales that were said to enshrine all the wisdom of his people. The king ordered one of his most trusted counsellors to procure a copy of the anthology, whatever the cost. The counsellor devoted years of his life to the assignment. He infiltrated the court of the Indian ruler, gained his confidence, won over some of the courtiers and bribed others until finally he gained access to the precious manuscript and made a copy of it.

As a general rule, then, information was confined to the corridors of power. When it strayed beyond them it was because of some kind of breach in the system. Many legends glorify heroes who risked their lives in attempts to lay their hands on some mysterious formula or hidden truth. There were occasions when knowledge flowed outside narrow channels, spread through cities or even entire regions and stimulated open debate among philosophers and scholars but such historical interludes were rare.

The circulation of knowledge has always been closely associated with intellectual emancipation and the democratization of public life. What is new is that the exceptional situation of yesterday has become today's general rule. The flow of information is responding to a need which is widely felt to be irresistible.

This does not mean that knowledge has ceased to be a source of power. It would be more accurate to say that scientific progress, the development of new communications technologies, universal demands for freedom, as well as the spread of literacy which constantly increases the demand for information are factors that encourage a trend towards openness and sharing. More and more information is reaching more and more people. And different forms of power, the power of economic, academic, political and military institutions, can only perpetuate themselves through the possession of increasingly specialized knowledge which today they are able to keep secret for a shorter and shorter time.

The flow of information is thus constantly widening the circle of citizens who are capable of making choices, as well as multiplying the choices they are called on to make. This complicates life for those who would like to make people's choices for them. The freedom to inform has become a categorical imperative. For these reasons UNESCO, whose mission is to promote the freedom of information, attaches the highest priority to its obligation to support all efforts to multiply and expand the channels through which this freedom can express itself, and to resolve the inevitable dilemmas caused by its development. 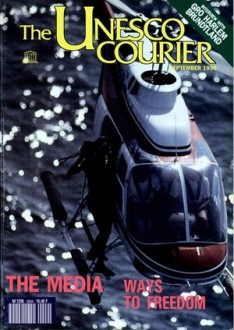