Music on the move

"Without music, life would be nothing." Nietzsche's aphorism neatly encapsulates the importance of music in human history, a subject so vast that this issue of the Unesco Courier can only attempt to trace a few of the many directions in which music is moving today the context in which it is created, produced and listened to.

In the West it is widely felt that music is going through a period of crisis. It is true that the experimental work of modern composers, in conjunction with technical innovations, has transformed the conditions in which both popular and so-called serious music is created through the mysterious and inexplicable process which Anthony Burgess examines in this issue. For a modern composer like Iannis Xenakis, scientific thought is part and parcel of creative renewal, as his own work amply demonstrates. While some forms of contemporary musical experimentation are taking place in relative isolation, other traditional forms are today acquiring a range and significance they have never had before.

In Latin America this is happening with protest songs and the "nueva canción", new songs which have emerged from a specific historical situation, and, as Uruguayan composer Daniel Viglietti describes, have had a continent-wide impact. Musical feedback between continents can be fruitful. It is, for example, a not uncommon misconception that African music is pro¬ duced within a rigid tradition.

How far this is from the truth emerges from the testimony of Lamine Konte, an African "griot" or musicianstoryteller who in this issue describes the wealth of modern musical life in Africa and the vitality of its traditional components. He stands at a cultural crossroads between Africa and Europe, and draws inspiration from both continents. China is a country with an especially long musical tradition. An instrument such as the Chinese lute is surrounded by a pattern of symbolism which has been recorded in writing since very early times. In this issue we publish a text on the subject by the great Dutch orientalist Robert H. van Gulik.

The development of the electronic media (cinema, television, records, radio) has vastly increased the accessibility of music worldwide, so that it is now possible to speak of a "phonosphere", as does our contributor Mikhail Tarakanov. This phenomenon is not without risk. In addition to the danger of noise pollution and, eventually, of the weakening of the creative sensibility to which Professor Nils L. Wallin draws attention, there is also the possibility that certain forms of production may distort or debase musical values.

The long association of cinema and opera, whose moments of fulfilment and of tension are here analysed by Dominique Jameux, is a fascinating example of a phenomenon in which such risks may arise. Finally, it is impossible to overemphasize the role of music as a form of social communication. The pianist Miguel Angel Estrella is a leading figure among those who are trying to bridge the gap between so-called classical and popular music, the product of a false antithesis. By designing a concert hall in which listening ceases to be a passive activity, a musician-architect like Xenakis is also opening wider the gates of access to music.

Discover other issues on music in the Courier 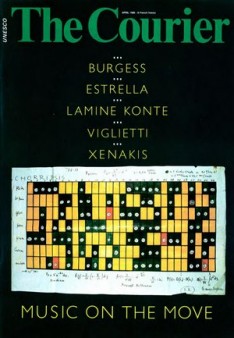