A New look at the history of communism

A few months before the fall of the Berlin wall an American historian named Francis Fukuyama published an essay entitled "The End of History?", which attracted widespread media attention.1 Communism was collapsing, and only democracy now remained as the "final form of all human government". History, in the sense of "a simple, coherent evolutionary process", had come to an end.

In the long story of the world the end of history has been proclaimed - cheerfully, anxiously or resignedly - more than once. To my mind, however, the keynote of 1989 was something different - unpredictability: the unpredictability of what happened in that year, the growing unpredictability of the future it heralded, the unpredictability, even, of the past that it brought to an end. The recent past was primarily affected, but the remoter past has also become opaque and in a sense unpredictable. This is where the historian comes in.

History clearly needs rewriting in the former Eastern bloc countries (the very expression used to designate these countries smacks of uncertainty, as though they can only be described in terms of something they have ceased to be and it is not yet possible to say what they are). It is equally clear that this will be a difficult task and will involve more than just making corrections, replacing inaccuracy with accuracy. There is also a risk that new distortions will take the place of old ones (the new ones perhaps mere revivals of older historical myths). The articles in this issue of the UNESCO Courier, with their varied approaches, give some idea of the extent of the task and of what is at stake.

It would be quite wrong to regard this essential rewriting as the business of the "East" and no one else. The changes in the East are affecting the West and will continue to do so. We are all in the same boat. We always have been. Despite the antagonism between the two camps, some of their basic presuppositions were the same. Both shared a similar relationship with time and a similar idea of history, based on the idea of continuous progress. Scientific socialism, its face turned towards the radiant future, for long even looked like the cutting edge of modernity. In spite of very real political differences, we were both beneficiaries of what I would call the same great regime of historicity. That regime, which began to exist around 1789, finally broke down before our eyes in 1989. This is why the rewriting of history is, for a fundamental reason, also the business of the West. Should we talk of rewriting, or of writing? What history should we write today? What past, for what present? 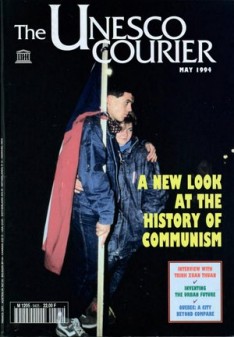