Twenty-seven new sites have been inscribed on UNESCO’s World Heritage List, in Quebec (Canada). While no changes were made to the List of Heritage in Danger, “reinforced monitoring” was requested for four sites: Bordeaux, (France),Timbuktu (Mali), Historic Sanctuary of Machu Picchu (Peru), Samarkand (Uzbekistan).

Under the new mechanism, first introduced in 2007, the Committee will be kept informed of developments affecting the preservation of these sites on a regular basis with a view to deciding on their future status on the World Heritage List.

The 1972 Convention concerning the Protection of the World Cultural and Natural Heritage is perhaps the most widely recognized and effective conservation instrument in the world. One of its main purposes is to ensure “the identification, protection, conservation, presentation and transmission to future generations of the cultural and natural heritage”. Inscription is thus not an end in itself but only the beginning.

The World Heritage Committee provides leadership in promoting systems to support the sustainability of heritage sites. There are processes to identify threats to World Heritage properties, including periodic reporting, reactive monitoring and, in cases of severe threat, In Danger listing.

Over the past biennium, the World Heritage Committee examined almost 300 State of Conservation reports, the highest number ever examined by the Committee. Nine properties were removed from the List of World Heritage in Danger, in recognition of the improvement in their state of conservation, while 5 additional sites were added. By flagging them on this special list, the Committee hopes to drawn particular attention to their plight.

Tip of the iceberg

But the In Danger List is only the tip of the iceberg. Most of the 878 World Heritage Sites face conservation problems: construction of skyscrapers, bridges or oil pipelines, uncontrolled tourism, poaching, climate change.

The first major case discussed by the Committee was the proposed Mitte Wein project in the Historic Centre of Vienna, which in 2003 sparked an ongoing debate. The most recent example is the proposed Gazprom Tower development in St. Petersburg, by the major Russian natural gas company. During its meeting in Quebec, the Committee asked Russia to invite an expert mission from the World Heritage Centre and the International Council on Monuments and Sites (ICOMOS) to evaluate the tower’s impact, and to postpone action until results of the analysis are available.

Infrastructure projects like dams, canals, roads and bridges are often highlighted in the state of conservation reports on specific World Heritage Sites. In the case of the Group of Monuments at Hampi, India, a proposed bridge that threatened the site’s values was re-routed away from the property, leading to the removal of the site from the In Danger List in 2006. Another situation yet to be resolved involves a proposed bridge at the Dresden Elbe Valley. In 2006, the Committee took the position that the bridge would “irreversibly damage the values and integrity of the property”. This year, it regretted the construction of the bridge underway and urged the authorities to opt for a tunnel. If the bridge construction is not stopped and damage reversed, the Committee decided, the property will be deleted from the World Heritage List in 2009.

The threat of uncontrolled tourism is one that occurs frequently at World Heritage Sites. There are travel companies that create tour packages around UNESCO sites, using the label ‘UNESCO World Heritage Site’ as a tourism marketing brand. At Angkor in Cambodia, there are reportedly 5000 visitors a day. In the Galapagos Islands, tourism has increased from 40,000 visitors in 1991 to 120,000 in 2006. The problems related to tourism include threats to public security and the heritage resources as well as to the quality of the visitor experience. The World Heritage Committee works on developing principles for responsible tourism that apply to the stewards and custodians, to tour companies, to the people who write guidebooks as well as to tourists.

Over time, the Committee has dealt with cases of mining, logging, gas and oil extraction as well as the poaching of animals for commercial purposes. And the Committee can claim some spectacular successes, such as the re-routing of the mining road around Huascaran National Park (Peru) and the re-alignment of a proposed oil pipeline outside the watershed of Lake Baikal (Russia). A singular achievement for UNESCO is the 2003 undertaking by the International Council on Mining and Metals not to explore or mine in World Heritage Sites, recognizing them as “no-go” areas.

Among the less manageable threats are natural disasters, including extreme weather events, fires and floods often related to the broader issue of climate change. In collaboration with international institutions and committees, the World Heritage Committee has developed its own policy framework and operational plan for monitoring and addressing the impacts of climate change on World Heritage properties. (See “Case Studies on Climate Change and World Heritage”, a 2007 UNESCO report)

Another issue that is beyond the control of the Committee is the threat to sites from civil unrest and armed conflict. As an example, particular concern for the deteriorating condition of the properties in the Democratic Republic of Congo (DRC) led the Committee last year to decide on a comprehensive approach for all five In Danger sites.

The Committee has also recently adopted a “reinforced monitoring mechanism” for properties inscribed on the World Heritage List in Danger, applying it to the five sites in DRC, as well as Dresden and Jerusalem. This mechanism can be activated either by the World Heritage Committee or by the Director General of UNESCO in specific and exceptional cases. At its 32nd session in Quebec, decisions were taken to apply it to Timbuktu (Mali), Machu Picchu (Peru), Samarkand (Uzbekistan) and Bordeaux (France), which are not on the In Danger List. The case of the five DRC sites was again closely examined.

For the first time in the history of the Convention, the World Heritage Committee in 2007 decided, with deep regret, to remove a property, the Arabian Oryx Sanctuary in Oman, from the World Heritage List. The Committee judged that the property had deteriorated to the extent that it had lost its Outstanding Universal Value. This dramatic moment of the Convention reminds us all that protection of World Heritage is a shared responsibility. It is the obligation of States Parties to protect the World cultural and natural heritage situated on their territory; 4 it is the duty of the international community as a whole to assist and to cooperate with States Parties in this endeavour.

At the 32nd session in Quebec, Canada made a special effort to engage young people in the work of the World Heritage Committee. The long-term conservation of our World Heritage Sites depends on the will of future generations to take over stewardship responsibilities. Engaging today’s youth will shape the decision-makers of tomorrow. 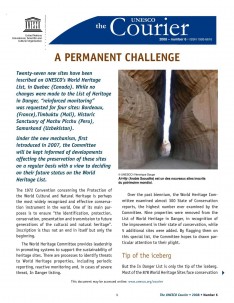