Eight philosophers contributed to this issue of the UNESCO Courier, focusing on the role of philosophy today. Different approaches, varied concerns, but one certainty: philosophy can’t stay in its ivory tower. It provides a weapon against dogma and manipulation. And, to cite one of Jostein Gaarder’s ideas, philosophers have a cosmic responsibility. They stand up against dogma and manipulative arguments. They express concern about intolerance and rising fanaticism. They remind us too that we are primates and our first task should be taking care of the planet. And they advocate philosophy that goes beyond mere words.

“I don’t believe at all in what is commonly called today the death of philosophy,” wrote French philosopher Jacques Derrida in 1972. Nor do the philosophers in this issue. But they do recognize that philosophy’s impact on society is not what it could be, and philosophers themselves are partly to blame. And how could they make themselves useful? “By avoiding speaking in a way that is abstruse, fuzzy, incomprehensible, to a few fans of sectarian modes of thinking who get off on sticking together and intellectually reproducing through incest,” answers Michel Onfray (France), a resolutely down-to-earth philosopher.

Jostein Gaarder (Norway) would be the last to contradict him, being someone who advocates a philosophy that can help us write the instruction manual for spaceship Earth. “Philosophy is nothing less than a celebration of mankind’s consciousness,” he says. “So shouldn’t a philosopher be the first to defend human consciousness against annihilation?” Here, the author of “Sophie’s World” warns us, “We are the first generation to affect the climate on earth – and perhaps the last that won’t have to pay the price for it.”

As for Turkish philosopher Ioanna Kuçuradi, she explores the verbal domain to denounce a certain conceptual confusion, reigning notably in political discourse. She takes interest in the word “value”, which she sees as a catch-all term, stating, “In an age in which the search for meaning leads people to become suicide bombers, fully grasping the concept of value and that linked to ethical values is another task expected from philosophers.”

“Dictators rarely oppress whole populations; rather, they persuade part of their population to help with the oppression of the rest, and they generally do this by presenting spurious arguments and flimsy but specious claims,” notes Peter J. King (United Kingdom).

Yet another philosopher who wants to clear up the verbal fog conjured up by simplistic non sequiturs and deception. “In countries under the boot of authoritarian, not to say rogue, regimes,” continues Mohammed Arkoun (Algeria), “the return of religion can be interpreted as the quest for refuge.” And he underlines that religiosity is gaining ground in the richest societies too, resulting in the marginalization of philosophical thought and culture.

Let us abolish religion’s authority over morality, admit we are not infallible, stop imposing our mores as universal law – we will stand a better chance of establishing a dialogue enabling us to avoid conflicts, adds Kwasi Wiredu (Ghana). Woo-Tak Kee concurs. “There is a limit to the roles that religion and politics can play in resolving conflicts among human cultures. It’s the philosophers who should provide solutions,” writes the South Korean philosopher, who launches here a debate on a philosophy of universality, or, to put it another way, a philosophy in search of universality in the midst of cultural diversity.

It is precisely the diversity of our lives that produces humour, writes M. E. Orellana Benado (Chile) who chooses to tackle the question of philosophy from the angle of laughter. “Our human world is essentially incongruous,” he says. “This is why it helps us in our survival to be able to extract the comic aspect of the incongruous.”

Alongside this main dossier, the Courier presents two retrospectives: one is a collection of interviews we have previously published, “Philosophers’ Corner”; the other focuses on “Philosophers celebrated by UNESCO.” 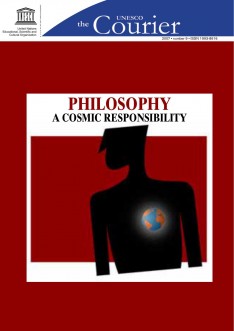