“Scholars have not paid adequate attention to the equity implications of climate change”, says Indian scientist Rajendra Pachauri, Chair of the Intergovernmental Panel on Climate Change (IPCC), 2007 Nobel Peace Prize. And he explains: “Thus far research has largely focused on the physical science aspects of climate change, the vulnerability aspects as well as on the options for mitigation. Now, however, there is growing awareness about equity as an ethical issue related to climate change.”

“It is unrealistic to think we can suddenly reduce emissions drastically to stabilize concentrations at the current level or even to attain lower levels,” adds Italian climatologist Filippo Giorgi. Member of the Intergovernmental Panel on Climate Change and head of the Earth System Physics Section in UNESCO’s International Centre for Theoretical Physics Abdus Salam International Centre for Theoretical Physics (Trieste, Italy). “Even according to the most optimistic forecasts, we will have to use twice our planet’s resources by the year 2050,” adds Mathis Wackernagel (Switzerland), giving alarming examples: “The United States uses twice what they have, whereas Egypt, Italy and Switzerland use three times as much as they have. ” Experts agree: we are at a point where we “manage the unavoidable and avoid the unmanageable,” to quote Filippo Giorgi. However, there still is hope, as the entire planet is becoming aware of global warming and its dangers.

As evidence, the student contest organized by the International Year of Planet Earth which shows how much mentalities have evolved with respect to environment. The Courier presents the essay of Irish student Nikita White as well as a series of drawings from different parts of the world. The issue also presents two international programmes aiming to preserve our environment: the Global Network of National Geoparks and the Biosphere Reserves.

Our features include the fascinating story of the book in Amsterdam, nominated 2008 World Book Capital by UNESCO, as well as an interview published posthumously of our colleague Tchicaya U Tam’si (1931-1988), considered one of the greatest African writers of the French language. 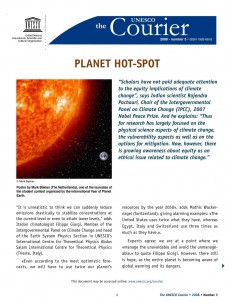