A nation stays alive when its culture stays alive” reads a defiant banner hanging above the main entrance to Kabul’s National Museum.

Half a dozen UN four-wheel drive vehicles are lined-up ready to carry passengers the 50 kilometres to Kabul. I share a place with several other new arrivals, including the incoming Minister of Women’s Affairs in the soon to be inaugurated administration of Hamid Karzai. She has not been back to Afghanistan in years, but her optimism and enthusiasm for the new-era in her country are infectious. Emotions overflow as we traverse a road littered with burnt-out military equipment, our car occasionally fording river crossings to by-pass bridges destroyed in aerial bombing attacks.

Winter’s shallow afternoon light casts Kabul’s streets as bleak and spare. Cyclists and donkey-drawn carts meander the thoroughfares, their riders, exhausted by years of conflict and harsh living conditions, peering expectantly at the newcomers now flooding into their lives.

In the days ahead, visits to key Governmental authorities and organizations tell their own story. An education system in chaos, where dusty shelves and cupboards in the central Ministry building are stacked with printed records of personnel and curricula which seem to match no reality. Schools lie in ruins. Women, once the backbone of the teaching service, have been excluded from their duties for years and girls have had to rely on clandestine schooling.

“A nation stays alive when its culture stays alive” reads a defiant banner hanging above the main entrance to Kabul’s National Museum. Once the repository of the artefacts and jewels of Afghanistan’s rich cultural civilization, it is now a shattered structure, most of its treasures having been plundered or wantonly destroyed. Across town at the Bakhtar National News Agency, journalists struggle with a solitary decrepit teleprinter to receive and send news. With a fledgling private press only now emerging, the country faces an information deficit on a grand scale.

The challenge of forging new nations

The Afghanistan situation is not unique. Wherever there is war, major civil unrest or new nations are being forged from the fires of conflict or political transition, there often exists a need to reconnect society, reconstruct the cultural fabric and tackle major issues, such as abject poverty, social deprivation and violations of human rights. Cambodia had its own initiation in the early 1990s as it re-emerged from the horrors of a brutal past, while Timor Leste, a decade later, was born amid tumult and violence. Europe saw the depths of pain in the former Yugoslavia, and Africa has experienced the genocide of Rwanda and, now, the agony of Darfur.

While international humanitarian relief and development agencies cannot, alone, solve societal and infrastructural problems which have been years in gestation, their immediate presence in post-conflict situations can be crucial in assisting local authorities and civil society in setting agendas, defining objectives and goals, and encouraging democratic outcomes. In situations where ‘everything’ needs renovation, prioritizing is complex. Expectations by the long-suffering populace are high, while skilled human resources and immediately available aid funding are often limited. Ethnic and political fractures are usually still apparent, while basic delivery mechanisms for development programmes can be non-existent.

An important role for the International community

International intervention is not without its own problems. An influx of well-paid foreigners can impact hostilely on local economies, lifting the costs of basic food and services to well beyond the reach of the general population. Inevitably, international agencies and NGOs source local employees from the already well-educated, urban elite, further exacerbating divisions between ‘haves and have nots’, while also draining skilled human resources from local enterprises. Without rapid and tangible change for the better, especially in general living conditions, tolerance by the citizenry to the presence of the global aid community can quickly turn to cynicism.

Each post-conflict society is responsible for planning, shaping and re-building its own future. But it is also true that the global community has an expectation that agencies such as UNESCO will also be present as partners of goodwill and expertise in the renewal process. For development agencies, walking the fine-line between knowing when and how to act, and when to exit a post-conflict situation, is much like a de-mining expert facing the challenge of clearing another of Afghanistan’s minefields. Every step forward needs careful judgement and consideration. However, although danger lurks, without those tentative steps there can be no successful outcome to the nation-building task. 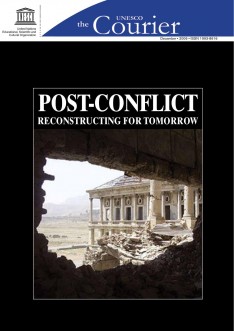