Questions of our time

Our July issue was devoted to certain problems relating to culture, in particular those concerning the application of State cultural policies. In this our annual double issue of August-September, the Unesco Courier examines certain aspects of a number of universally recognized world problems: the development crisis, the arms threat, the dangerous imbalances provoked by disparities in the conditions of life of different peoples, disregard of human rights, the problems of the dissemination of knowledge.

These two issues thus evoke Unesco's most fundamental concerns and essential functions in the world spectrum of today.

In both issues, the conclusion reached by our contributors, even when they appear to be most divergent, all concur in one respect: these grave world problems cannot be attacked piecemeal. Culture is inherent in development, in the long term education is the key to the maintenance ofpeace, new technologies to be viable must respect cultural identity, social progress within a nation is inseparable from consensus between nations.

This, then, is the reason for and the justification of Unesco's contribution to the attempt to achieve global understanding of the problems we have to resolve. And it is this "total" approach that is in our minds when we speak of "the world problématique": the urgent problems of our time are indissociable and their solution calls for a united effort of will.

It is to be hoped that such an approach to world problems will gradually give rise to a new mental attitude in international public opinion which will in turn facilitate the practical success of the most daring and ambitious enterprises in the service of the human community. Thefearfulperils of contemporary life must not be allowed to deter us from undertaking the intellectual effort of reflection that is the prerequisite of any action liable to benefit the peoples and nations of the world. 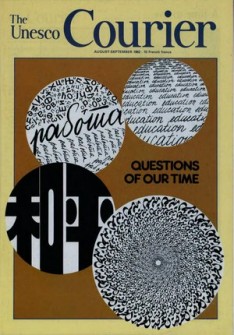