It was in Tirana twenty years ago. Our guide - a Party member, of course - was unwilling to linger in front of the ageless and clearly abandoned mosque.

"Doesn't anyone come and pray here any more?"

The man's smile was slightly condescending. Surely we knew that religion is an optical illusion, a smokescreen laid down by the oppressors among the oppressed? Marx had summed up the matter perfectly when he described religion as "the opium of the people." There was no reason why religion should survive once its social and political foundations had disappeared, as they had in Albania. Clearsighted peoples can look truth in the face.

What do the clear-sighted see today? One thing is undeniable. It is the foundations of socialism that have collapsed, in Albania and in the rest of eastern Europe, and that at a time when religion occupies an important place in peoples' lives. Or perhaps it is simply reoccupying the rightful place of which its enemies had vainly tried to deprive it.

But the collapse of European communism has generated shock waves that go much further than this swing of the pendulum. The bankruptcy of totalitarianism in the East, which has led to that of authoritarian nationalism in the South, has created a political and ideological vacuum that fundamentalism is trying to fill. Where religion was until recently gagged by or in thrall to the state, it is now being used as a lever with which to challenge the state; yesterday excluded from the political reckoning, today it is summoned by the fundamentalists to fill the entire political arena. In the process it is denying individual values in the name of the community, repressing freedom in the name of dogma, and extinguishing intelligence in the name of faith.

The relationship between politics and religion has always been turbulent, but humanists all over the world are starting to feel alarmed about its latest episode - fundamentalism. In an attempt to understand the emergence of fundamentalism and its extremist deviations towards intolerance, violence and crime, a meeting of "Intellectuals for a Single World" was held in New Delhi earlier this year. Entitled "Religion and Politics Today", the meeting was jointly organized by the Unesco Courier, the Rajiv Gandhi Foundation and World Media Network. 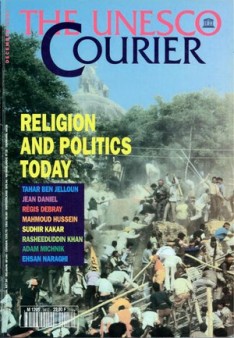