The Western world today may be rediscovering something that Asia and Africa have never lost sight of the importance of gesture and rhythm in the lives of individuals and communities. Natural, functional and ritualistic gestures, and biological, seasonal and cosmic rhythms may, unbeknown to us, set the tempo of our relationship with the world around us and with ourselves. In anthropology and the history of religions, in art, dance and poetry, these ideas are beginning to regain their long-lost central place.

In the last 200 years, industrial society has asserted the primacy of the intellect over the body and of reason over intuition. Human beings have had to adapt to time as measured by the clock rather than to biological time, to the requirements of machines rather than to those of nature. They may as a result have acquired an impressive mastery of the material world, but they have also in many cases become gradually alienated from their bodies, from their environment and from other people.

It is perhaps because our societies have gone too far in this direction that we are today witnessing a reaction, in the form of types of individual or collective behaviour which, however different or even contradictory they may be, are all rooted in a search for the values of the body and of nature or in nostalgia for a lost sense of community and for collective ritual experiences on a grand scale. All these phenomena which include the vogue for physical exercise and sport, the practice of yoga, zen and meditation, the popularity of dance music with a strong beat, mammoth concerts attended by many thousands of spectators may be seen as signs of a desire for a less abstract, less disembodied, less individualistic world.

Some commentators think that this trend has an even wider and more fundamental significance. They see it as a return to something very basic to human life, and believe that gesture and rhythm may give us a unique glimpse of certain essential truths, of a primordial wisdom reconciling nature and culture, the sacred and the profane, the human being and the universe.

Opinion has long been divided between those who maintain that the origins of society are of a historical, social and cultural order, and those who believe in a transcendental, spiritual explanation. This debate is far from over. We hope to make a useful contribution to it in this issue by giving a hearing to some original ideas about gesture, rhythm and the sacred. 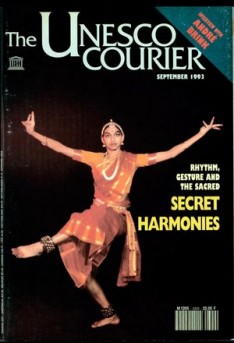