In Asia, where Oryza sativa, the most widely cultivated of the world's rice species, is generally believed to have originated, many languages use the same expression, "eating rice", to convey the idea of "a meal" or "eating" in general.

Rice is the staple food of more than a third of mankind. It constitutes half the diet of one thousand six hundred million people and another four hundred million rely on it for between a quarter and a half of their diet. Nine tenths of all rice grown comes from Asia, and the civilizations of this part of the world have developed profound links with rice. Despite the fact that, as the French geographer Pierre Gourou points out in his recently published book Riz et Civilisation (Rice and Civilization), rice was not a factor in the emergence of these civilizations (the Chinese and Indian civilizations existed long before rice acquired its later dominant position) it is certainly true that rice has influenced, indeed fashioned, the rites and social structures of these civilizations by the demands it imposes upon them, including the need for availability of a large labour force and mastery of the growing environment.

As was stressed during the International Symposium on Civilizations Related to Rice Cultivation in Asian Countries (organized by The Centre for East Asian Cultural Studies in collaboration with Unesco, which was held in Kyoto, Japan, from 6 to 10 June 1983), by its physical and spiritual presence rice came to pervade the vocabulary, the daily life, the literature, the arts and even the beliefs of the peoples of Asia.

Owing to the constraints of time and space it was clearly impossible in a single issue of the Unesco Courier to assess the influence of rice on all the countries of Asia. We have therefore selected a few particularly striking examples of the impact of rice on the lives and minds of the peoples of the region. These include the deep-rooted notion of the "rice soul", the Tamil festival of Pongal, the kalapana system of ancient Thailand and the Azolla cult in Viet Nam.

If a certain emphasis has been given to the impact of rice on myth and custom, not forgetting its socio-economic implications, our opening article by professor Monkombu Swaminathan, director of the International Rice Research Institute, draws attention to the progress achieved in genetic research on rice thanks to which crop yields have increased rapidly over the past two decades. The Food and Agriculture Organization of the United Nations has estimated that it will be necessary to increase the production of rice by three per cent annually until the year 2000 merely to keep pace with the demands of a rising world population. 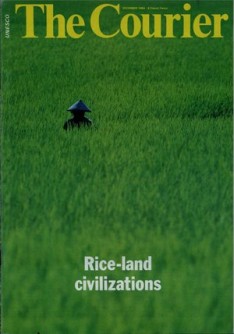