Whether they bring life like the Nile, or provide succour in the hour of death like the Ganges; whether like the Mississippi or the Yangtze they day-in day-out tax the resources of human ingenuity; whether like the Volga and the Danube they have served as ramparts against invasion; or whether they have kept many of their secrets like the mighty, impetuous Amazon and Congo, the world's great rivers are an essentialpart of the history of mankind.

In this issue ofthe Unesco Courier we have invited writers from different countries to evoke some ofthese waterways which, in their many-sided roles as providers of sustenance, subjects of myth, arteries of communication, have enabled those living on their banks to broaden their horizons, build civilizations, strengthen their identity. Sacred bonds have been forged with some, like the Ganges; others, like the Danube, have influenced the course of secular history. Asfor the Amazon, its basin is a natural laboratory which has seen the evolution of countless animal andplant species which man has never fully catalogued and which he owes it to himself to preserve.

Our cover shows a stream in Martinique, for small streams and mighty rivers share a commonfate. What is the message of this rivulet to the Congo, the Amazon, or the Yellow River? What does the rocky trickle say to these great repositories of life?

"Rivers of the world, beware. Fear, as I do, the wantonness of mankind. Yesterday my waters nourished the black fish with flat heads, the fat grey shrimps that are here called native - species that are disappearing or have already vanished. Recklessly used fertilizer, rampant deforestation have sullied my course."

But the damage man has caused, man can repair. Today is no time to weepfor the past nor to reject the resources which science and technology offer to the peoples of the world. Our task is to adapt these resources to the real needs ofmankind and toforesee catastrophes to which unwise use of these resources may lead. The fate of rivers is inseparable from that of threatened forests, regions ofdesert encroachment and flooded farmland. 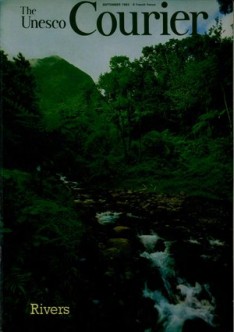