The Story of the universe

With this special issue of the Unesco Courier we offer both an invitation and a challenge to our readers. We invite you all to join us on a voyage of exploration of our Universe, a voyage that ranges from the heart of the atom to the outermost limits of space, from the beginning of time to eternity. We challenge you to give full rein to your imagination ás we enter the realm of the unseeable, of the infinitely large and the infinitesimally small.

Isaac Newton, that giant among scientists, was not the first man to see an apple fall to the ground. He was, however, the first to make the daring leap of the imagination which enabled him to see that a falling apple and the Moon circling the Earth were governed by the same force gravity. Yet when questioned, Newton confessed that, although he knew how gravity behaved, he did not really understand how it worked.

So those who find this voyage of discovery difficult to comprehend fully are in good company.

Much of science is concerned with things we cannot see gravity, sub-atomic particles, light waves, the heart of a star, the galaxies at the outer limits of space. Yet human curiosity about the origins and future of our Universe drives us remorselessly on to probe these mysteries.

In attempting to draw up a balance sheet of where we stand today in this unending quest, to draw a picture of the unseeable, we are obliged to use the language of the everyday "seeable" world. Like the poet, we have to fall back on metaphor and simile. This is why we invite you to bring your imagination with you on this voyage of discovery.

As a teenager in Berne, that other giant scientific genius, Albert Einstein, asked himself "What would the world look like if I rode on a beam of light?". From this innocent but imaginative question sprang the whole of modern physics and the best explanation yet available of the origins of our universe.

Einstein sought explanations but never ceased to marvel at the wonder of the music of the spheres.

For him there was no conflict between the findings of science and the profound cosmological insights of the religions of the world. "The eternally incomprehensible thing about the world", he wrote, "is its comprehensibility".

Come along with us, then as we try to signpost the way towards an understanding of our universe, towards an unending vista of profound delight. 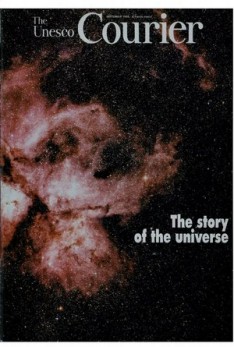