This year, which the United Nations has proclaimed "Year for Tolerance", promises to have a full programme of international events: the centenary of motion pictures and radio; the fiftieth anniversary of the foundation of the United Nations and the adoption of Unesco's Constitution (Unesco did not actually become fully operational until the following year); two international summit meetings - the first, in March, on social development, the second, in September, on the situation of women.

As everyone knows, there is a world of difference between the gilded surroundings in which such events take place and the tragic situation in which hundreds of millions of people are afflicted with hunger, endemic diseases and illiteracy, and tens of thousands are killed, uprooted or traumatized by war, ethnic and religious conflicts, and outbursts of fanaticism. All those who, directly or indirectly, in intergovernmental and non-governmental organizations, work on behalf of international co-operation for peace, are constantly aware of the terrible gap between their dreams and the reality, between their efforts and the limited effects of their action.

To the question they often hear: "What's the point?", they unhesitatingly reply, "Without these dreams and efforts - despite the mistakes, failings and even sometimes the cowardice that tarnish them - what would happen? What would there be to resist the offensive of incomprehension and violence?"

The unique and patiently woven network of shared experiences, of successes and failures, that we call the international community is still irreplaceable. This does not mean that it cannot and should not change. On the contrary, at a time when it is celebrating its fiftieth birthday, in a world that has been completely transformed, the United Nations must also change and be given a new lease on life by the major powers that define the framework of its action. It must be instilled with determination to act for the common future of all rather than the immediate self-interest of each. And of course it must possess the means to implement its decisions.

The coming year, with its watchword of tolerance, will thus be a challenging one. The forthcoming international events will only make sense if they go hand in hand with clear thinking and well targeted action. The Unesco Courier will keep its readers informed of what is being done to achieve these goals in the fields of culture, education, science and communication. We cordially invite you to express your opinions on these issues via our "Letters to the Editor" page.

We hope you will agree with us that the sun is an appropriate choice as the main theme of the first issue of the year. Central element in human mythology, emblem of promise and new beginnings, bringer of light, warmth, life and creation, the sun is now becoming, thanks to scientific and technological progress, a colossal source of usable, affordable energy. It is up to us to see that "the sun is for everyone" and that this energy is tapped for the good of the greatest number.

To read this issue downloa the PDF

Our selection of online articles:

Learn more about light in the Courier 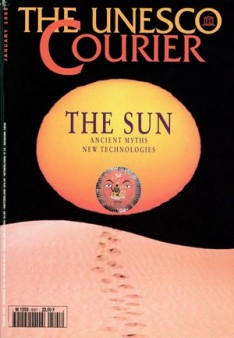