Theatre of the world

Whether popular in origin like the Italian commedia dell'arte, courtly like the khon theatre of Thailand, linked to ritual as in Africa, religious like the miracle plays of medieval Europe, or avowedly divine like India's kathakali, theatre has always been the "concentrated expression" of a culture, drawing on popular myths, legends and customs, historic ways of life and experiences, and assimilating all forms of art, human expression and communication.

World theatre covers an immense canvas. It ranges from the dazzling spectacle of kabuki, European opera, and North American musical comedy, to the austere settings, devoid of scenery or props, of Japanese noh and the "theatre of poverty" practised by the popular groups of Latin America. It may be performed in a traditional purpose-built theatre, or outdoors in streets and squares, as in parts of the USSR. It may be governed by rigorously codified conventions, like Beijing Opera, or improvised, like the avantgarde experiments of the Living Theater. It may recreate great moments from myth, religion or history, like Greek, African or Thai theatre, or become aform of direct action on behalf of marginal social groups, as in North and South America. It may vehicle a classic literary text or, as in certain works by Peter Handke and Robert Wilson, reject "the tyranny of the word". It may, as in India, Egypt and China, continue an ancient dramatic tradition, or it may systematically cast tradition aside (as in the countries ofthe West where it could be said that rejection of tradition has almost become a tradition in itself). In every case theatre has always triggered the creative capacity of the individual and the community and provided a mirror of identity.

Theatre is also a meeting place for different cultures, and a vehicle for their enrichment. Sophocles' Antigone has been transposed into Creole language and Afro-Haitian beliefs, Shakespeare's Macbeth into the expressive forms of India's Yakshagana theatre, Brecht's Caucasian Chalk Circle into the traditions of Georgia, and works of Sophocles and Aristophanes have been adapted to the distinctive political situation of Catalonia. Theatre is a place for reaffirmation and assertion of cultural identity. While such Oriental techniques as those o/kabuki are being adopted in Europe, Shakespeare is performed in a production influenced by Chinese circus, and Peter Brook takes an international troupe of actors to African villages, Third World countries which send the best oftheir traditional theatre to internationalfestivals are using the latest avant-garde techniques to recreate, denounce, and dramatize their own situations. These and other aspects of world theatre are examined in this issue of the Unesco Courier, in the light of the belief that this total art is one of the finest expressions of Unesco's overriding ideal: the promotion of mutual comprehension between peoples through knowledge of the immense variety of their cultures and forms of expression, eschewing hierarchies and invidious value judgments. 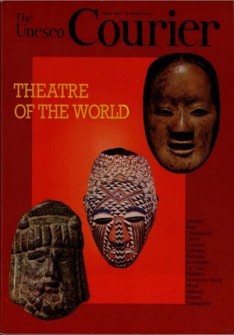