A Treasury of tongues

To take account of the universality of human language and of the diversity of forms which language takes is a task beyond the possibilities of a magazine. And so, even if this special issue of the Unesco Courier resembles a dictionary in its presentation, readers will not find in it a panoramic survey, still less a detailed inventory, of the languages used in the world, nor a study of the various possible systems of transcription.

We hope, all the same, that the dozen or more articles on the following pages will give readers an impression of the unity as well as the phenomenal riches of the world's treasury of tongues. However, we have decided to adopt a largely sociocultural approach to the problem of languages, presenting for reflection certain points which are particularly significant and which also lie at the heart of Unesco's thinking and action.

The supreme instrument of com munication, a tool for teaching and learning, a vector of civilization, the spoken or written language remains the mainstay, the key to the cultural identity of both groups and individuals. In this context, the right to be taught in and to speak one's mother tongue is a fundamental right, and one which Unesco stubbornly defends.

Linguistic diversity is seen today, not as a cause of fragmentation, a hindrance to effective communication between cultures, but, through a multitude of individual cases, from country to country and continent to continent, as the precondition of dialogue between peoples and cultures.

Time and again, our contributors denounce the linguistic "racism" which honours the written above the spoken word or which judges certain languages to be innately inferior to others. All of them, not least the linguists, condemn these attitudes based on false premises and stress thefundamental equality of all. languages that transcends their differences. Any disequilibrium between languages is always the result of historical and economic circumstance, never of any inherent defect in a particular language. In the last analysis, re-establishing a language balance is as much a question of collective as of political will.

To diminish further the world's rich linguistic diversity, already in part stifled, would be a dangerous course to take. As this issue of the Unesco Courier makes clear, strategies for the preservation of this diversity are as varied as the situations the different languages face; on their rapid and successful implementation depends the development, in the widest sense of the term, of that diverse unity mankind. 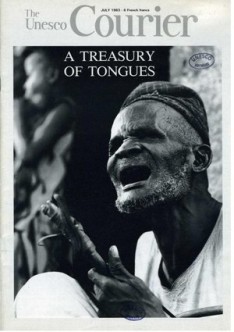